he worked in favour of antifascists and partisans 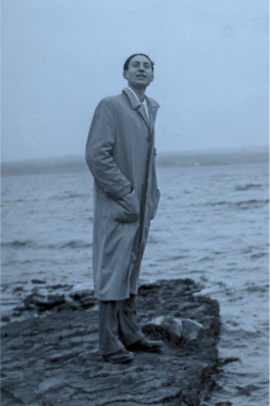 Francesco Quaianni was born in L'Aquila in 1916 into a large and modest family. In 1935 he joined the State Police and in 1937 he was called to arms. During his military service, in 1939, he met Major Adolfo Longo, with whom he became a friend and who helped him to enter the partisan organization of Piacenza. Once discharged, he took up service at the police station in Pola, which was then on Italian territory. He was then transferred to the police station in Piacenza and finally to the police station in Milan. In 1943, Quaianni, who had always been against any form of violence, to avoid going to battle, accused the most varied disorders to be admitted to the military hospital, also facing painful and unnecessary surgery.

With the birth, in northern Italy, of the Social Republic of Salò began the worst period for Italians, who had deluded themselves that Fascism was over and who instead found themselves having to face the most terrible of the civil wars because, while the south was slowly freed by the Anglo-Americans, the north was again under an atrocious dictatorship controlled directly by Nazi Germany. Many Italians, exhausted by years of war, persecution and violence, decided to go underground, organizing themselves into bands of combat with the aim of sabotaging the new regime, hindering the German advance while waiting for a military aid of English and Americans, who would have to advance from the south to free all the Italian territory. Francesco was also touched by these events, and began on his own initiative in the Milan Police headquarters to do some sabotage against Nazi-fascists. On duty at the Milan Police headquarters in the "Arrested" office, Quaianni, when he was alone, took advantage of this to send home the people arrested by the black brigades, or to eliminate from the police files complaints against anti-fascists. He suggested to returnees how to obtain the ration cards without having military documents and avoided accompanying young people, who had been arrested for not showing up in the barracks despite their class being called back, to the military district. Sometimes he was able to issue false military licences or identity cards.

Thanks to his work at the police station, he could easily access secret documents and armed circulate at any time of day or night, even during curfew. At this point, since he was already carrying out the task of saboteur inside the offices of the Milan Police, he was contacted by Adolfo Longo, member of the military committee of the Piacenza C.N.L., who had become head of the National Information Service (S.I.N.), who, thinking of extending the activity to Milan, intended to rely on him. Longo suggested to Quaianni to join the secret organization, and he obviously accepted. Knowing in advance of the raids that would be carried out by the Republican Police, he warned those concerned so that they would not be found. He reported the movements of Muti's military officers, who arrested, tortured and executed partisans, and warned the comrades about the judicial operations underway against them, giving them the names of the officials who would carry them out in order to avoid arrest. He pointed out to his leaders the place of the checkpoints and the list of the offices of the National Republican Guard, from which the partisan comrades should be kept their distance. It reported to the interested parties of seizures of goods by Germans. Moreover, he inserted in the file of the foreigners of the police headquarters false cards of members of the organization S.I.N., who, being sought by the fascist police office (U.P.I.) of Piacenza, had taken refuge in Milan, where under a false name they continued to work for the liberation. Sometimes, he would report to his bosses the names of officers and soldiers who had escaped from prison and of deserters who wanted to take part in the partisan struggle. At other times, he also tried to find safe places in Milan where he could hold secret meetings of the members of the partisan movement of Piacenza.

Quaianni, therefore, thanks to his employment at the police headquarters of Milan, works in favor of anti-fascists and partisans first as a simple official then as part of the secret organization S.I.N. (through Command National Liberation of Piacenza).