activist for the peaceful coexistence between Kurds, Syriac Christians and Arabs 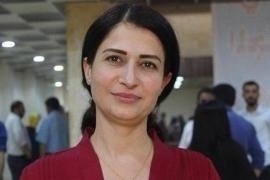 Thirty-five years old, with a degree in civil engineering and General Secretary of the Future Syria Party, Hevrin Khalaf was an activist who dedicated her life to the struggle for peaceful coexistence between Kurds, Syriac Christians and Arabs, reason why she was esteemed by all communities. She fought for women's rights in Islamic communities and she was known for her great talent for diplomacy. Those who knew her spoke of her as a sort of "foreign minister" of the Rojava.

Recently she led a tribal women's Forum. The latter, for her, were the crucial subject of a possible democratic transition to an inclusive Syria that respects minority rights and highly decentralised compared to the baathist approach. At the time of its founding, on 27 March 2018, the Future Syria Party had affirmed among its principles the secular nature of the State, as well as that of a “multi-identity" Syria, the "renunciation of violence" in favor of a "peaceful struggle for the resolution of disputes", the "equality between men and women" and the respect for the resolutions of the United Nations, "in particular Resolution 2254, according to which all factions of the Syrian people should be represented in the political process, including the drafting of a new Constitution".

On 5 October 2019, Hevrin Khalaf spoke in public for the last time in Ankara, opposing Turkey's intention to occupy Kurdish lands and claiming the role played by Syrian democratic forces in the liberation of North East Syria from terrorist groups. "We reject Turkish threats, they hinder our efforts to find a solution to the Syrian crisis. During the period of Isis' dominion at the borders, Turkey did not see this as a danger to its people. But now that there is a democratic institution in North East Syria, they threaten us with occupation”.

The Guardian confirmed the murder of Hevrin, killed in cold blood on October 12, by possibly pro-Turkish militiamen on the M4 motorway, between Manbij and Qamishlo, in the areas where Ankara's troops invaded Syria.

Her death has caused numerous reactions at international level. "Hevrin Khalaf - said the President of the European Parliament David Sassoli - is the face of dialogue and empowerment of women in Syria. Her killing by Islamist terrorists, who are more active after Turkey invaded Kurdish territory, is a horror on which the international community will have to go all the way”.