the "rebel out of love" 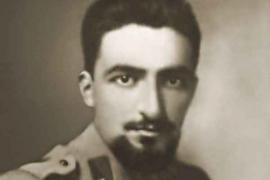 Teresio Olivelli, called as the “rebel out of love”, was a protagonist of the Resistance in the Brescia-Cremona-Milano triangle, closely in touch, ever since his first arrival at Brescia, with members of the local liberation movement as important as Peppino Pelosi and father Carlo Manziana.

He worked hard to create the newspaper Il ribelle, whose first issue, published on 5 March 1944, was dedicated to the memory of Astolfo Lunardi and Ermanno Margheriti, sentenced to death by the special tribunal of Brescia on 5 February and executed on the morning of the following day at the shooting polygon of Mompiano. His goodbye to his friend, in which the evangelic sentence is echoed, can be considered as Olivelli's spiritual will: “Only those who lay down their lives can give and receive life”.

In the paper's second issue, Olivelli asserted his plans. “Our is above all a moral revolt” he wrote. Seeing his own country, Italy, subject to the enemy and despoiled, its culture suspended between victimhood, a false sense of pity and self-interest, he said: “Never so far we have felt so free as when we found again at the bottom of our conscience our capability to rebel against a passive acceptance, combined with a will to rise up against the oppression of the foreign enemy”.

Olivelli, captured on 27 April 1944 in Milan and immediately taken to the jail of San Vittore, where he was tortured, was moved to Fossoli, then Bozen, Flossenburg and in the end to Hersbruck. While imprisoned he put himself to the service of the others, up to the ultimate sacrifice: while defending his fellow inmates he was brutally hit by a Polish guard.

Teresio Olivelli is honoured in the Garden of Brescia.