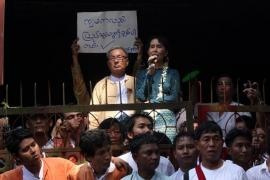 Aung San Suu Kyi was born on 19 June 1945 in Rangoon. The daughter of general Aung San, considered the architect of modern Burma and assassinated in 1947 by political rivals, she lived in both India and the United States until 1988 when she returned to Burma to look after her ailing mother. That same year marked the fall of the historic Socialist-led government in Burma in a coup that saw an authoritarian military junta seize power. Fired by her Buddhist faith and Gandhi’s spiritual legacy, Suu Kyi started to take an active role in politics as a pro-democracy campaigner. She also helped form the National League for Democracy in Burma, becoming its leader. She was arrested and only following intense international pressure, granted house arrest on 20 July 1989. She has refused the generals’ offer to leave the country in exchange for her freedom and has continued to defend the cause of democracy, despite repeated attempts to intimidate her since 1990, when the regime refused to recognize the results of elections that had chosen her as the country’s leader. Repeatedly imprisoned, she has been definitively segregated in her own home. Over the years she has stood out as a prisoner of conscience and an advocate of passive resistance, thereby receiving numerous honours, including the Sacharov prize and the Nobel Peace Prize.
She has paid a heavy price for her actions: she was forbidden from looking after her husband, who was suffering from cancer and who died in 1999; she is forced to live apart from her two sons, who emigrated to the United States.
In 2007, when the Buddhist monks led protests all over Burma, first against rising fuel costs and then in favour of democracy and human rights, Aung San Suu Kyi became the main point of reference for the protest movement. At this point, the regime was pressurized to allow several eminent authorities from the West to visit her in the home in which she is forced to live isolated from the rest of the world. In one of her most famous statements she said: “It is not power that corrupts, but fear. The fear of losing power corrupts those that wield it and fear of the scourge of power corrupts those that are subject to it”. Aung San Suu Kyi was freed on 13 November 2010, ten days after the elections.