the historian persecuted for criticizing the ayatollahs 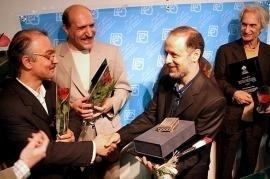 An invalid of the 1980 Iran – Iraq war, Hashem Aghajari was a professor of history at a teacher training college in Teheran. An active member of the reformist movement known as the “Organization of Mujaheddin of the Islamic Revolution”, he was sentenced to death for apostasy in 2002 after criticizing the theocratic government, blind obedience to religious leaders and, especially, for saying that Muslims should not follow Islamic guidelines “like monkeys”. His sentence provoked massive student demonstrations, following which the “supreme leader” Ayatollah Khamenei ordered his case to be re-examined. In 2003, the spokesman for the court set up to re-consider his case, Gholamhussein Elham, declared that he would correct the procedural defects, but not the contents of the first sentence. Due to the Court’s blatant hostility, Aghajari refused to attend the hearing and asked for his trial to be transferred. In June of the same year, Aghajari was among the 250 intellectuals that signed a declaration in which Iran’s religious leaders are accused of substituting themselves for God. In 2004, following widespread international mobilization, his death sentence was changed to an eight-year prison sentence. He was then released that same year as a result of constant pressure and demonstrations in his favour.
In 2003 the Foundation for Moral Courage awarded him the Jan Karski prize.