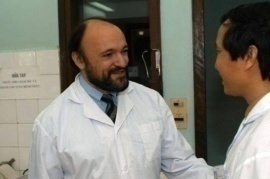 Italian doctor, he was the first to identify and classify SARS. Graduated in medicine at the University of Ancona, he specialized in infectious and tropical diseases in Messina. Active since his youth in humanitarian operations, at the end of the 1980s, when he was a general practitioner in Castelplanio (Ancona), he began organizing trips to Africa together with his colleagues, where local populations died from highly curable diseases, such as diarrhea or respiratory crises. "An impressive number of children die of dehydration from diarrhea and a few sachets of reintegrations worth a few euro cents would be enough to save them" - he wri several times, tormented by a paradox he cannot understand.

In 1993 he became a consultant to the World Health Organization for the control of parasitic diseases, and with this assignment he went numerous times to the African continent. In the following years, with Doctors Without Borders he worked in Cambodia during the Khmer Rouge regime to control endemic diseases among the local population, despite threats of attacks. In Cambodia Urbani stayed for a year, and found on his way - starting from the banks of the Mekong - a country to be rebuilt. The wounds of genocide weigh heavily, the anti-personnel mines that continue to mutilate  young people and adults, the wounds of souls, the drama of AIDS. With the genocide, two millions out of less than 7 million of the population were slaughtered by the followers of Pol Pot. "It looks like an immense shrine - notes Urbani - for me and my family it was like meeting the survivors of Auschwitz".

In 1999 Carlo became president of Doctors Without Borders Italy, with which he led a real battle for the diffusion of essential medicines to the entire world population. As Urbani himself reported in an interview with Avvenire in 2000, "90% of the money invested in drug research is for diseases that affect 10% of the planet's population. Only 0.3% of research is directed towards five leading causes of death in the world ". Just think of Tuberculosis (TB): "in our days TB kills one victim every 10 seconds. It is the second leading cause of death from infectious diseases in adults: it kills 3 million people every year, 80% of whom are aged between 15 and 49 years ". 95% of them live in low-income countries, but "only 400 thousand are potential paying customers: too few, say the industries". This is for Urbani the mission of the medical-humanitarian, engaged not only in the care of the sick but also in contexts of poverty, genocide and civil wars: to heal but in the meantime denounce, testify, make known. With this commitment Urbani went to Oslo in 1999, as part of the delegation that will receive the Nobel Peace Prize in the name of Doctors Without Borders.

July 2000 was the year of the professional turning point in Urbani's life: the hiring of WHO as coordinator of health policies against parasitic diseases in Southeast Asia. This was a radical choice - for which he also renounced the role of head of the infectious diseases department at the Macerata hospital - which led Carlo and his family to move to Vietnam.

In February 2003, the French hospital in Hanoi contacted the WHO for the case of a patient - Mr. Chen - who no one knew how to treat and who was infecting medical staff. As it happened when something troubling arrived in Hanoi, the WHO staff decided to "call Carlo". Urbani then decided to go in person to the bedside of Mr. Chen, an American businessman from Hong Kong, without sending "his" doctors in advance. He was the only one, in the wards of the hospital in Hanoi, to realize that he was facing a new disease:  thus he raises the alarm to the government and the WHO, managing to convince them to adopt quarantine measures. It was not easy for Urbani to succeed in his intent: the need to immediately isolate patients and monitor all travelers went against the economic and image interests of the country. In the end, however, the prestige and credibility that Urbani had acquired over the years succeed in persuading the authorities, who decide to rely on his prescriptions and start the isolation procedures.

A few days later, while flying to Thailand, Carlo felt the first symptoms: fever, cough, weakness. With a tragic self-diagnosis, he was afraid he had contracted the virus and once he landed he asked to be immediately hospitalized and placed in quarantine. He died after two weeks, on March 29, 2003, recommending that his lung tissue be used for research. A month later, on April 28, Vietnam announced it has defeated of Sars, with a toll of 63 infections and 5 deaths - unlike other countries, where the virus had spread more widely.
WHO medical officers acknowledge that, had it not been for Urbani's timely intervention, SARS would have infected further and faster. We will never know how many lives he saved with his.

After his death, the then Secretary-General of the United Nations Kofi Annan wanted to remember him with these words: Dr Carlo Urbani dedicated his life to helping protect and save the life of others. It was characteristic of vigilance, professionalism and expertise that he was instrumental in ensuring an early response by the international community to Severe Acute Respiratory Syndrome. Had it not been for his recognition that the outbreak of the virus was something out of the ordinary, many more would have fallen victim to SARS. It was the cruellest of ironies that he lost his own life to SARS while seeking to safeguard others from the disease. Dr Urbani lives an inspiring legacy in the United Nations family and the global public health community. For his contribution on the front lines of the fight against disease, he will be remembered as a hero - in the best and truest sense of the word.