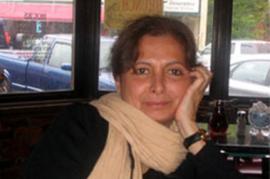 Mehrangiz Kar has been persecuted by the Iranian regime for her efforts to defend human rights, especially those of women.
Born in 1944 at Ahvaz, in southern Iran, she attended the College of Law and Political Science at Teheran University. After graduating, she worked for Sazman-e Ta’min-e Ejtemaii (Institute of Social Security) and published over 100 articles on social and political issues.
Arrested on 29 April 2000 for taking part in an academic conference in Berlin on political and social reform in Iran, along with leading Iranian writers and intellectuals, she was tried behind closed doors without any guarantee of defence and sentenced to four years detention on grotesque and arbitrary charges such as “actions contrary to national security” and “violating the Islamic dress code”.
Released on bail before the trial, she travelled to the United States for treatment for breast cancer. After her departure, her husband Siamak Pourzand, also an active critic of the regime, disappeared and Mehrangiz received strong pressure from Teheran to keep her mouth shut. Her attempts to have news of her husband via government institutions and human rights organizations failed, as did the appeals she and her daughters Leila and Azadeh made on international radio and television networks. However, several weeks after his disappearance, government security forces announced that Mr. Pourzand was in the Islamic Republic’s jails charged with spying and threatening national security. On 3 May 2002 the Tehran Press Court sentenced him to 8 years imprisonment.
In the meantime, on 8 January 2002, the definitive sentence against Mehrangiz Kar was reduced to six months detention.
Kar has published numerous works on women’s issues.

Brief bibliography
Children of Addiction: Social and Legal Position of the Children of Addicted Parents, Iran, 1990.
Quest for identity: The Image of Iranian Women in Prehistory and History, Vols. 1 and 11 (Vol. 1 1992, vol. II ready for publication), edited by Shahla Lahiji, Iran’s first woman publisher, accused and sentenced in the same trial as Mehrangiz.
Angel of Justice and Patches of Hell, a collection of essays on the status and position of women in pre- and post-revolutionary Iran.
Women in the Iranian Labor Market, 1994 and Legal Structure of the Family System in Iran.