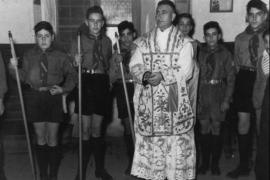 Somascan regular cleric, he worked for the good of Velletri population, who was deeply affected by the war advance on the front of Lazio region during the Second World War. He built, again in Velletri, the orphanage of St. Martin and became a reference figure for all those in need. A rescuer, but also an important figure in the dialogue between religious and political faith.

Italo Mario Laracca was born in Minturno, now in the province of Latina, from Giovanni Laracca and Francesca Zambarelli, on 22 July 1904. When he was very young he entered the congregation of the Somaschi Fathers as a seminarian, as did his brother Luigi, following the example of his uncle Father Luigi Zambarelli. He graduated in Canon Law on July 1935 and, on October of the same year, succeeded Father Francesco Salvatore as priest of the parish of San Martino in Velletri, which he would lead almost uninterruptedly until 1982 and where he lived until his death. From 1943 to 1945, his missionary and charitable work took place in the city of Velletri while it was destroyed by bombing, which prepared the advance of the ground forces from Anzio to Rome. During this period, Father Laracca wrote a daily war diary noting down events, names, small facts and even direct experiences, in addition to prayers. In 1946 he became Rector of the Orphans at Santa Maria in Acquiro, in Rome, was then appointed General Procurator of the Order and, in October, Superior of the  Casa Generalizia Somasca in Rome.

In 1949 he was decorated with the bronze Medal of military value for what he did to help the population during the war, an experience from which he drew the collection of writings for the publication - in 1964 - of the volume "Tra le rovine di Velletri", now in its seventh edition. Father Laracca's literary production did not end here, in 1966 he printed a booklet containing the poems of his uncle Father Luigi Zambarelli and in 1967 the monograph "The Church of San Martino and the PP. Somaschi in Velletri from its origins to 1967".

In 1975 he was awarded the Cross pro Ecclesia et Pontifice and, by the President of the Republic Giovanni Leone, the titles of Commander and Grand Officer of the Republic. On 13 March 1982, because of his age, he left the leadership of the parish of San Martino, where he continued to live and where he received, on January 1993, the Honorary Citizenship of Veliterna from the mayor Patrizio Saraceni.

At three o'clock in the morning of 14 February 1997, Father Italo Mario Laracca died at the hospital of Velletri, leaving the entire city dismayed, who gave him his last greeting in the Cathedral of San Clemente and then with a funeral procession that crosses the entire length of the historic centre.

The memory of "Padre Curato" remains alive in Velletri thanks to the merits and the example traced in the hearts of many, as symbolized by the inaugurations of a bronze bas-relief in the "Sala delle Lapidi" of the Town Hall (1998) and the marble bust, made by the Association dedicated to him, placed in front of the funeral chapel of the Somaschi Fathers at the civic cemetery (2002).