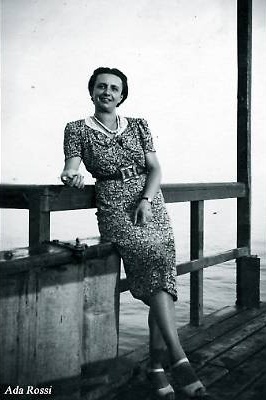 An Italian partisan and antifascist, Ada Rossi was born in Golese (Emilia) on 10 September 1899 into a cosmopolitan family, and she was brought up to the ideals of freedom and equality by her mother. In 1917, just after obtaining her diploma as a primary school teacher, she witnessed to the suffering of the Caporetto veterans and experienced the revulsion against the nationalist and pro-war rhetoric. She graduated in Mathematics from the University of Pavia – where one of her fellow students was killed by the fascist squadrons – and then she moved to Bergamo to work as a teacher. There she met Ernesto Rossi, a teacher, as well, in the first line among the militants of Giustizia e Libertà. Out of love and rebellion, Ada decided to marry Ernesto although he had already been imprisoned and sentenced to 20 years in jail for his opposition against the fascist regime. As the wife of an enemy of the nation, she was fired from school, then filed by the police, and in 1942, sent to the confinement in Forino (Avellino), Melfi and eventually Maratea. Her active commitment in the Resistance went far beyond being the wife and supporter of one of the authors - along with Altiero Spinelli and Eugenio Colorni – of the Manifesto of Ventotene (original title: For a free and united Europe. Project for a manifesto) which will the basis of the European Federalist Movement. Ada in facts played a key role in propaganda, communication and above all political education of the young people to the antifascist values, and the idea of a possible Europe united in solidarity and free. Some of her students – to whom she gave private lessons as she was excluded from teaching in the public school system – would then form the first lines of the Bergamo Resistance. During her visits to the Isle of Ventotene – where her husband Ernesto was sent after being released as a consequence of an amnesty law - Ada fell in love with the Manifesto and secretly took it to Bergamo together with Ursula Hirshmann to have it typed. Thus she started disseminating it. Federal Europe was in her opinion the only opportunity to achieve a future of democracy and peace. She decided to participate in the birth of the European Federalist Movement, and in the years of the Swiss exile of Ernesto, she contributed to the international propaganda of its valus. She died in Rome in 1993.