liberal judge and pioneer of feminism, fought for gender equality at the US Supreme Court 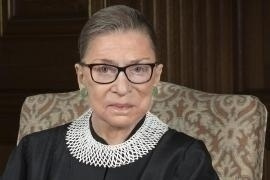 Ruth Bader Ginsburg, a US Supreme Court judge who died on 18th September at the age of 87 due to an incurable disease, was one of the most influential individuals in the American Jewish community of the last fifty years. Deeply convinced, as a woman and as a magistrate, of equality of human beings, she was a tenacious supporter of equality of men and women and significantly contributed, as a lawyer and a magistrate, to claiming women's rights in the United States.

Born in Brooklyn on 15th March 1933 to Jewish parents - her father immigrated from Ukraine and her mother was born in New York to parents from Austria - in 1954 Ruth graduated in law at Cornell University, where she met her husband, Martin Ginsburg. She later obtained her law degree at Harvard University, in a course attended by only nine women, including her, out of approximately 500 students. After completing her studies at Columbia University, in 1963 she started her career as a law professor at Rutgers University, New Jersey, where she remained ten years.

During this time, Ruth started her battle for gender equality as general counsel for the American Civil Liberties Union (ACLU), reporting over 300 cases of gender discrimination - six of which before the Supreme Court - and helping to launch ACLU's Women's Rights Project.

In 1980, President Jimmy Carter appointed Ginsburg to the United States Court of Appeals for the District of Columbia. In 1993, President Bill Clinton appointed Ginsburg to the Supreme Court and she became the second woman in the history of the United States to hold that position and the first female member of the Jewish community to serve on the Court.

"Ginsburg had earned her reputation as a strong advocate of gender equality already as a common person. As a magistrate, first as a judge of the Court of Appeals and then during her 27 years as a Supreme Court Judge, she built on that legacy", wrote American journalist and writer Erin Blakemore in her portrait of Ruth Bader Ginsburg published on History.com, recalling the different fronts of Ginsburg's work to legally enshrine gender equality and ensure effective equal protection for women and men.
"Drawing on previous rulings concerning civil rights in relation to race - in cases brought by men - Ginsburg demonstrated the reasons why the Supreme Court had to put an end to gender discrimination. Many of her cases hinged on the Equal Protection Clause of the Fourteenth Amendment, which provides that people are equally protected under US law. Through a number of minor cases, she attacked discriminatory laws".

Besides claiming the principle of equal pay for equal work, Ginsburg firmly defended women's right to abortion throughout her mandate at the Supreme Court.

In her 2016 consent in the Whole Women's Health v Hellerstedt case, Ginsburg provided a convincing defence of women's right to choose. And she did so on her own. "No other judge signed the consent, in which she had written that "many medical procedures, including delivery" are far more dangerous than abortion and had claimed that Texas law, limiting abortion, went "beyond all rational understanding”.

Her belonging to the Jewish community greatly impacted on Ruth Ginsburg's ethical beliefs, as she stated in 2017 when she attended a religious service on Rosh Hashanah, the Jewish New Year. On that occasion, she explained how her Jewish identity and the texts she had read during her life had inspired in her a sense of empathy for other minority groups. "If you are a member of a minority group, namely a group that has been targeted, you feel empathy for others in a similar situation. The Jewish religion is an ethical religion. That is, we are taught to do good, to love mercy, to do justice not because we will be rewarded in heaven or punished in hell. We live righteously because that is how people should live and not because we aim at being rewarded in the afterlife".

Ruth Ginsburg also played a crucial role in making the American legal system more accessible and understandable to citizens, bridging the gap between the law, the Constitution and the legal system on the one hand, and the society that institutions should serve on the other. "I cannot think of another legal figure who had such profound influence and awareness on the daily life of the society in which she lived as she showed, or who was as popular as she was", said Dorit Beinisch, former President of the Supreme Court of Israel, in her editorial published in the Haaretz newspaper in memory of the "brave justice warrior of justice whose voice is needed in our tough times". "Many criticized her popular approach. Her behaviour was different from the typical conduct of magistrates: she was willing to speak in public events, she was often interviewed, she loved music and art of all kinds, she accepted with great humour criticism in TV entertainment shows, she was open and attentive to others".

In 2018 in Tel Aviv, when receiving the Genesis Prize Foundation's Lifetime Achievement Award for her "outstanding work as a jurist in the field of civil liberties and women's rights", Ginsburg claimed to be "a judge born, raised and proud to be Jewish".

Ginsburg was unofficially considered to be the leader of the liberal part of the American judiciary.