outspoken advocate of civil and political rights for African Americans 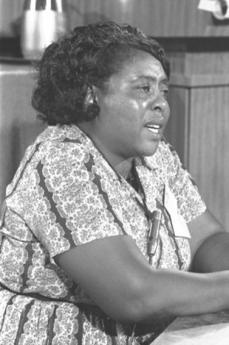 Fannie Lou Hamer was born on 6 October 1917 in Montgomery County (Mississippi) into a family of sharecroppers. In her youth she attended the conferences of the Regional Council of Negro Leadership, a group that promoted civil rights, self-help and business ownership for Afro-American people. In 1961, unbeknownst to herself, she was sterilized by a white doctor in compliance with a campaign to reduce the number of poor blacks.
In 1962, the volunteers of the Student Nonviolent Coordinating Committee came to town to hold a voter registration meeting. Fannie Lou was surprised to learn from their words that Afro-Americans effectively had the right to vote. When the members of the Student Nonviolent Coordinating Committee asked for volunteers to go to the courts to register to vote, Hamer was the first to raise her hand. This was a very dangerous decision: a coloured person could be fired, beaten, even lynched for such a choice. Later Hamer, known as the woman who was “sick and tired of being sick and tired”, was to say: “The only thing they could have done to me was kill me, and it seemed to me that they had been doing just that little by little since as long as I could remember”.
On 31 August 1962 she went with others to register at the court. The whole way she sang hymns to boost her companions’ morale. She was noticed by the leaders of the main Afro-American organizations, who asked their collaborators to identify “the woman that sang hymns” and to involve her more extensively in their activities. On her return from the court, she was deprived of her job, her home and land, but she found work as secretary to the Student Nonviolent Coordinating Committee. One night, unidentified thugs fired 16 shots through the windows of her house.
In 1963, Hamer and her companions were arrested and beaten by the police for having eaten in a restaurant for white people. The beating she received was so severe that it left her with permanent physical and psychological damage. In spite of this, she never gave up her struggle, alongside the movement’s main leaders, for the political rights of black people.
In the summer of 1964 she was one of the founder members of the Mississippi Freedom Democratic Party (MFDP), which challenged Mississippi’s all-white delegation at the Democratic National Convention. Hamer testified before the party’s “Credentials Commission”. In a presentation broadcast live on television before millions of viewers she explained how the blacks were prevented from exercising their right to vote via illegal taxation and intimidation. Her speech led to two MFDP delegates being authorized to speak at the Convention and to other members being accepted as guests of honour.
Hamer died of cancer on 14 March 1977 at the age of just 59, but she is remembered as a role model in America’s civil rights movement.

Fannie Lou Hamer is honoured in the Garden of Nichelino.