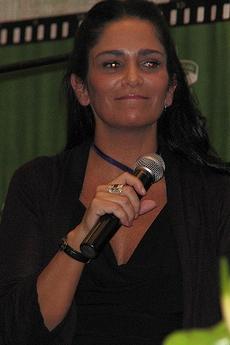 Lydia Cacho is a journalist and writer, born in Mexico City in 1963, of a mother of Portuguese origin and a Mexican military engineer. She began her career working for the cultural section of the newspaper Novedades de Cancùn, but soon turned her attention to the country’s social problems. She has published articles in Mexico, Spain, the United States and Canada. She runs a crisis centre for sexually abused women and children in Cancun, in Mexico.
Following the publication of her book Los demonios del Edén, in which she accused prominent Mexican figures of being involved in a child pornography ring, she has received death threats and was kidnapped and imprisoned by the Mexican police. In May 2007 Lydia’s car was sabotaged and she only just escaped with her life. She has lived under protection for the last two years since she risks retaliation on the part of wealthy paedophiles and corrupt politicians. Supporting her is a campaign signed by 2000 artists, both Mexican (including film director Alejandro Gonzales Inarritu and actor Gael Garcia Bernal) and international (Milos Forman, Noam Chomsky, Sean Penn, Debra Winger, Demi Moore, Susan Sarandon and Bridget Fonda).
In 2007 Lydia Cacho received the "Ginetta Sagan Award for Women and Children's Rights" from Amnesty International, in recognition of her denunciations and the high-security protection that she offers the victims of human trafficking and abuse in Cancun. She is the first Mexican citizen to have received this prestigious award. Since 2006 she has been in the front line in investigating and solving the numerous repeated cases of unsolved murders and rapes of women in Ciudad Juàrez. In 2008 she received the UNESCO/Guillermo Cano World Press Freedom Prize.