a student victim of torture and a civil liberty activist 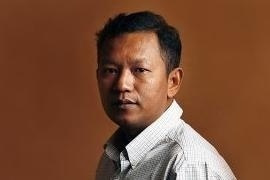 Bo Kyi is a Burmese human rights activist. In 1988, as a university student he took part in a series of demonstrations, known as the “8/8/’88 rebellion”, against the regime ruling his country. During the repression of these protests over three thousand demonstrators were killed and as many others wounded. Many were arrested, including Kyi, who spent more than seven years in prison, where he was continually subjected to torture and maltreatment. Bo nevertheless managed to hold out, he learnt English and worked out a plan to protect Burma’s political prisoners. When he was released, he fled to Mae Sot, in southern Thailand, and put his project into practice by founding the Assistance Association for Political Prisoners in Burma. The association focuses on gathering news of the political prisoners held in Burmese jails and getting the political forces and human rights associations to exert pressure on the regime in Rangoon for their release. For example, Bo Kyi has worked alongside Human Rights Watch, who gave him their yearly award for the bravest activists with the following motivation: “Over the last twenty years, Bo Kyi has demonstrated great bravery and resoluteness, sharing his story and that of other political detainees and denouncing the abuses committed by the Burmese government. Human Rights Watch honours Bo Kyi for his heroic efforts to get his voice heard against Burmese repression and to defend those that have dared to criticise the military junta”. In various newspapers, Bo Kyi has testified to the repression of the Burmese regime, which over the last few years has doubled the number of arrests for political reasons and, when unable to find the men they are hunting, imprisons their wives, parents and friends. The Assistant Association struggles to guarantee all these prisoners financial support, medical care, independent audits of their conditions and, lastly their release. Over twenty years, Bo Kyi’s efforts have stimulated the rest of Burmese society, giving rise to numerous pro-democracy associations.