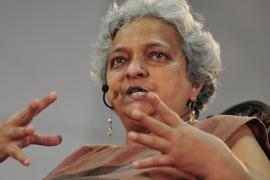 Sunila Abeysekera became an actress and singer while still at school and went on to become a theatre critic. Soon, however, fighting in Sri Lanka caused her to shift her focus. In 1971 a Marxist uprising and the State’s ensuing reaction persuaded her to join a political detainee support group. During the civil war between the Sri Lankan government and the Tamil Tigers, Sunila began to document arbitrary arrests, the use of torture and political assassinations. Numerous activists were attacked, but threats failed to deter her. After more than twenty years of conflict, in 2002 the government and the Tamil Tigers finally agreed to a ceasefire. But hostilities resumed in 2006 and with them increasingly widespread and serious human rights violations. Government forces were implicated in massacres of civilians, indiscriminate bombardments and complicity in the kidnapping of children to be trained as soldiers. Meanwhile the Tamil Tigers were accused of direct attacks on civilians, the murder of political opponents and constantly recruiting children. On this subject, Sunila Abeysekera said: "We have a humanitarian crisis combined with a human rights crisis ". As a Sinhalese, she belongs to Sri Lanka’s ethnic majority but she tried to establish direct contacts with the Tamils after fighting broke out again in 1983. "As a member of the majority ethnic community, all my life I have taken part in collective actions and creative activities to defend minority rights and to celebrate minority cultures", she explains. Her commitments have also included monitoring what happened under the aegis of anti-terrorist and emergency legislation; in this sense she has been a real thorn in the regime’s side and in 1988 she was forced to emigrate and to seek shelter in the Netherlands. Since her return to Sri Lanka, she has devoted her efforts to defending women’s rights, documenting their condition both at home and abroad. For Sunila Abeysekera, Sri Lanka “is a country in which human rights and freedom are constantly being eroded by corrupt practices, impunity and a culture of violence that pervades every aspect of people’s lives”.
Sunila has never completely abandoned her life as an artist and uses song as a form of protest: she performs in difficult places, such as police stations or in areas ravaged by war.
Her current commitment is to create a peace and reconciliation process for her country’s warring factions.
See the site of the Women and Media Collective where Abeysekera has worked: womenandmedia