writer, lecturer in sociology at the Mohammed V University of Rabat, Morocco 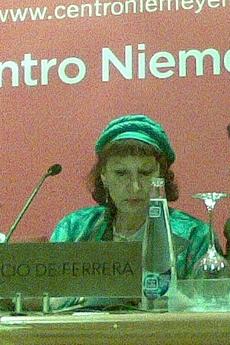 Born in Fez, in Morocco, in 1940, Fatima Mernissi is considered one of the most authoritative and original Arab intellectuals, thanks to her innovative approach to sociology and to her study of Islam. She completed her academic education at the Sorbonne and at Brandeis University in the USA and today she lectures in sociology at the Mohammed V University in Rabat, Morocco. Best known for her novels, she has always distinguished herself for her courageous stance in favour of women’s emancipation, which she considers perfectly compatible with the precepts of the Koran.
Her books are widely read all over the world and have been translated into over twenty languages. Since 1997 she has supported the “Sinergie Civique” programme and since 2000 she has been a leading exponent of the “Caravane Civique” meetings, now into their sixth year. This project consists of organizing workshops in some of the remotest corners of Morocco in which communications experts give advice to the numerous, very small and often financially inexistent Moroccan NGOs.

Brief bibliography
Beyond the Veil: Male-Female Dynamics in Modern Muslim Society
The Veil and the Male Elite: A Feminist Interpretation of of Women's Rights in Islam
Forgotten Queens of Islam
Scheherazade is not a Moroccan
Dreams of trespass: Tales of a harem girlhood
Islam and democracy: Fear of the Modern World
Rebellion's Women and Islamic Memory