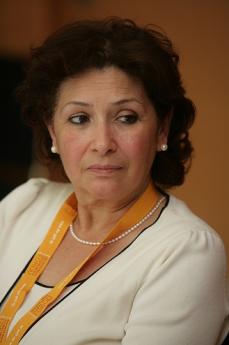 Sihem Bensadrine was born on 28 October 1950 in Marsa (Tunisia). She studied in France, at the university of Toulouse, graduating with a degree in philosophy. Back in Tunisia, in 1979 she became active in the movement for freedom of the press, women’s and human rights, joining the Ligue des Droits de l'Homme (LTDH). In the same year, with other feminists, she also formed the Club des femmes Tahar Haddad and took part in the Femmes Maghreb network 2002, animated by Fatima Mernissi. She joined the Associazione dei Giornalisti Tunisini (AJT) and in 1980 helped set up a women’s commission within the AJT.
In 1980 she also began working as a reporter for the independent newspaper "Le Phare" and, after being suspended from her post, then worked for the "Maghreb", a paper that was shut down in 1983. Hired as a member of the editorial staff of the "Gazette touristique", she then founded the "Hebdo Touristique" and became the director of the opposition newspaper "El Mawkif", close to the RSP (Rassemblement Socialiste Progressiste).
In June 1991, a file compiled by the LTDH denounced the numerous cases of death through torture in Tunisia. The Ministry of the Interior’s reaction was immediate: in vain, they demanded Sihem’s resignation as director of the Ligue and then decided to dissolve the organization forthwith, launching a defamatory campaign against the journalist.
At the end of 1998 Sihem founded the Conseil National pour les Libertés en Tunisie and the following year, along with a group of Tunisian and European intellectuals, she set up a company of Euro-Mediterranean authors, known as edizioni Aloès. On 10 April 2000 the authorities closed the headquarters of the publishing firm, which had hosted a conference on human rights. Sihem’s home was placed under constant surveillance, her friends were blacklisted and she was prevented from communicating via any electronic media.
In June 2001, she was arrested for having given an interview to a London television channel in which she denounced the systematic use of torture and corruption in her country. Under pressure from a Tunisian and international solidarity campaign, the authorities released her a few weeks later.
In 2002 she received an offer of support from the Hamburg foundation for victims of political persecution and since 2005 she has effectively been living in exile in Germany.
In May 2009 the International Editors’ Union assigned her the “International Press Freedom Award”; she shared this with two other journalists – Neziha Rejiba and Mohammed Talbi – who founded with her the Observatoire pour la Défense de la Liberté de la Presse, de l'Édition et de la Création (OLPEC), which rose from the ashes of edizioni Aloès. The award is the same one assigned posthumously to the journalists Anna Politkvoskaja and Hrant Dink, both assassinated for their commitment to the freedom of the press.