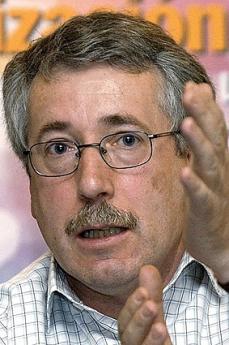 Gorka Landaburu Illarramendi is a Spanish journalist born in Paris in 1951. His father, Francisco Javier de Landaburu Fernandez, leader of the Basque Nationalist Party, had sought refuge in the French capital during the Franco era. His brother Ander , also a journalist, is the director of the Basque version of the daily newspaper El Pais. A member of the Spanish Socialist Party (PSE) since 1993, Gorka directs the weekly Cambio 16 and the magazine Aldaketa Hamasei: in his work he has always taken a strong stand against violent nationalism and terrorism in the Basque country, becoming a declared target of ETA. On 15 May 2001 he was the victim of a dynamite attack that caused serious injuries to his face and abdomen, the amputation of one finger on his right hand and three on his left. A non-conformist and an “awkward” character also for the pacifist forces, he became chairman of the Basque Group of the Victims of Terrorism and in 2006 he signed the manifesto “Sì en nuestro nombre, sì a que se busque la paz” [Yes in our name, yes to searching for peace] which promotes dialogue between the Spanish government and the terrorist organization in order to bring the painful chapter of terrorist violence finally to a close and move on to reconciliation.
He has received various awards, including the Bravo, the Olivo de Plata and the Micròfono de Plata, for his intense professional efforts and his social commitment.