a student persecuted by the ayatollahs 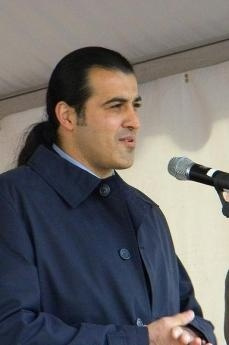 Ahmad Batebi was born in 1977 in Shiraz and in 1997, by then a university student in Teheran, he took part in the first mass demonstrations held in Iran since the 1979 Khomeinist revolution. When one of his friends was shot by the police, Ahmad raised the boy’s bloodstained T-shirt in indignation. The photo of his gesture was flashed round the world and the Iranian authorities arrested him for having offended Iran and thus Islam, and consequently God himself. He was asked to state on TV that he had accepted money from the United States and from Israel to exhibit the T-shirt but Batebi refused to do so and was locked up in Teheran’s notorious Evin prison, where he was subjected to physical and psychological tortures of all kinds. He was saved only thanks to pressure from international human rights organizations, but the torture anyway permanently damaged his hearing and in 2008, he suffered a stroke and was temporarily released following protests from the international community. He took his chance and escaped across Iraqi Kurdistan, pursued by the Iranian secret police. In Iraq he managed to contact the American embassy, which put him on a flight for Vienna and from there flew him to the United States, where he has settled permanently.
Now a symbol of the struggle against the Iranian regime, Batebi continues to fight for democracy in his country. On the occasion of the 2009 clashes, he denounced the arbitrary arrests, torture and illegal killings.