the doctor of Solidarity movement 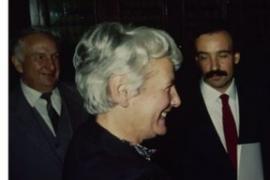 Picture taken at the Chamber of Deputies

Zofia Kuratowska was born in 1931 in a village in the outskirts of Warsaw.

In 1944 she took part in the Warsaw Uprising. From 1948 to 1950 she studied Polish studies at the local University. In 1950 she changed faculty and went to study Medicine, graduating in 1955. From 1956 to 1960 she was an assistant at the Clinics of Internal Medicine at the Institute of Hematology, becoming very soon one of the highest Polish authorities in this specialty.

In 1980 she joined Solidarność, becoming a member of the Solidarność National Committee of the Healthcare workers.

In January 1982, after the introduction of the State of War, she was among the authors of the so called “Letter from the Eight”, a protest letter sent to general Jaruzelski by a group of intellectuals, demanding the repeal of the state of war, the release of the interned people and the restoration of civil liberties.

From January 1982 to 1989 she was among the great personalities behind the Primate’s Committee of Aid to the Political Persecuted (1), in which she ran the medical branch. This is why she visited the internment camps and jails and witnessed, as an observer, to the political trials.

In 1983 and 1984, together with her husband, organized at her home a series of monthly meetings entitled as The truth about Poland, with the participation of prominent members of the opposition. The meetings were interrupted by a violent intervention of the Secret Service officials and the attempts to resume them at other homes were unsuccessful.

In 1983 she was interrogated many times and she was repeatedly threatened of serious consequences if she would go on to work for the Primate’s Committee, and in the end she was stripped off her title as a professor and her post as principal of the hospital in which she worked. She was the personality behind and the editor-in-chief of an underground medical magazine, “Notebooks of Independent Medicine”, whose first number was published in 1984, and went on until 1989. She also wrote many articles in the magazines “Krytyka” and “Kultura”, published in Paris by the Polish diaspora, in which Zofia tackled the key nodes of healthcare in Poland, the health condition in jails and the structural problems of the healthcare system, putting forward some reforms, pointing out the absolute need for them.

She chaired the Healthcare Commission created in 1984 by underground Solidarność and she was a member of the Executive Council of the Fund for Independent Publishing created in 1986. In 1985 she wrote a letter to the President of the Polish Academy of Science to protest the politically motivated expulsion of professor Bronislaw Geremek (2) .

From Autumn 1988 she was a member of the Civic Committee established under the Presidency of Solidarność by Lech Wałȩsa, whose leadership she supported. In April 1989, on the eve of the Round Table, she was appointed as President of Solidarity Social Foundation, created for the use of the fund donated to Solidarność by the US Congress.

She was among the supporters of the line of Lech Wałȩsa of dialogue with the authorities and, from 6 February to 5 April 1989, she took part in the Round Table’s work, presiding the panel on the healthcare service. These works would lead to the fall of the regime in Poland and the first half-free elections in June 1984.
Although her value as medical researcher is recognized at the international level, she is always marginalized and relegated in second class roles at work because of her social and political commitment. Until 1989 she was denied the academic title as professor.

In 1997 she is awarded with the Cross of Knight Commander of the Order of the Rebirth of Poland. Since 1997 she has been ambassador of the Polish Republic to South Africa. She died on 8 June 1999 in Pretoria, where her ashes are kept.

NOTES
(1) Prymasowski Komitet Pomocy Osobom Pozbawionym Wolności i ich Rodzinom (Primate’s Committee of Aid to the People Deprived of their Freedom and their Families), a charity set up on 17 December 1981 upon initiative of the Polish Bishopry, as a response to the State of War introduced on 13 December, that had caused the arrest and internment of the political activists and intellectuals. A presence in all Polish dioceses, the Committee organized and coordinated a broad action of solidarity both through the regular distribution of basic goods to the families of the people fallen victims to the crackdown, and gathering information on their fate and organizing legal aid and if necessary medical assistance for them. The people assisted by the Committee are estimated as having been nearly 20,000.

(2) Bronisław Geremek (1932 -2008), Historian of the Middle Ages, a member of the Polish Unified Workers’ Party since 1950, left it out of protests after the events of March 1968. In the second half of the 70es he joined the opposition movement and he was one of the great personalities behind the organization of the Association of Scientific Courses. During the Danzig strikes in 1980 he went to the coastal area and joined the expert panel created around Lech Wałȩsa. After the passing of the State of War in 1981, he was interned. He would be released after one years and stripped of his title as professor. He took part in the works of the Round Table of 1989. From 1989 to 2001 he was elected to the Polish Parliament and from 1997 to 2000 he was the Minister of Foreign Affairs. From 2004 until his death he was a Member of the European Parliament. He died in 2008 in a car accident.