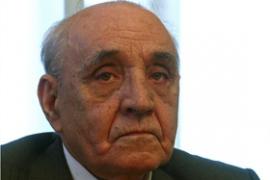 Vasile Paraschiv was born in Ploiesti. On leaving school, he worked as a telecommunications engineer. In 1946 he joined the Rumanian Communist Party. He left the party in 1968, convinced that the workers were “the victims of abuse of power and injustice on the part of the party activists”. On 29 July 1969 he was arrested at work and, after a brief preliminary investigation, he was locked up in the Urlat psychiatric hospital, where he immediately went on a hunger strike. He was released five days later. In 1976 he sent an open letter to Radio Free Europe in which he denounced the repressive measures taken against members of the dissolved Social Democratic Party. This led to his arrest and, on 1 December, he was once again locked up in a psychiatric hospital, where he remained until 26 December. Without a single clinical test, he was diagnosed as suffering from “manic psychosis”. On 8 February he sent an open letter to Paul Goma at the Belgrade Meeting of the Conference for Security and Cooperation in Europe, in which human and civil rights violations in Rumania were denounced. On 23 February he was arrested and ended up once again in the psychiatric hospital, where he remained for 45 days. After his release, he obtained a passport and a French visa. He travelled to Paris, where he met French and Austrian trade unionists. He also took part in a press conference during which he launched an appeal in support of free trade unions in Communist countries. In 1978 he managed to return to Rumania and in February 1979, along with Ionel Cana and Gheorghe Brasoveanu, he founded the first Independent Trade Union of Rumanian Workers. On 28 May 1979 he was stopped by the Securitate and tortured in a wood near Ploiesti. On 14 November 1979 he was once again subjected to horrendous torture, which he recalled as follows: “They took me back to the wood. They hit me in the head with sandbags until I passed out. Then they hit me with a rubber truncheon under the soles of my feet and punched me in the liver and stomach. Then they left me there, more dead than alive. I couldn’t understand a thing, I didn’t know where I was or how we had got there. When, a long time later, I managed to get to my feet, I felt as if all my organs had shifted”. During the events of 1989 he was back in the psychiatric hospital again. Since 1989 he has been one of Ploiesti’s leading trade unionists.