the "Mother Courage" of the Danzig shipyards 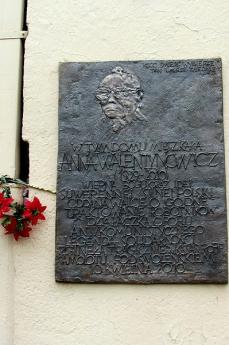 The “Mother Courage” of the Danzig shipyards was born in a small country village. At the age of ten she lost both parents and was adopted. In 1942 she moved with her adoptive family to Warsaw, where she only completed the first four years of primary school. After the war she had various jobs, but in 1950, she was hired as a welder in the Lenin shipyards in Danzig, where she became famous for her Stakhanovist achievements (270% of the standard).

She was then given a job as a crane driver. She joined the Socialist Youth movement and in 1951 was part of a delegation to Berlin. “That was the first time that I came up against falsehood and the first time my organization ordered me to lie” she said. This prompted her to leave the association, despite remaining a member of the League of Women.

She began to speak out in public against various instances of injustice, gaining the trust of the other blue-collar workers, but at the same time earning herself special attention from the Secret Police. They tried to sack her the first time in 1968, when she protested against the removal of funds set aside for the workers; after complaints by her colleagues, the measure was dropped but Anna was transferred to another department.

In May 1978 she joined the underground Free Trade Unions of the Coastal Area (WZZ) and began carrying and distributing underground press material while opening her apartment to meetings of the opposition movement. She suffered several 48-hour detentions and was the victim of numerous acts of repression in the workplace: she was forbidden to leave her crane during the lunch break, she was locked in the changing rooms, searched, and received negative notes and admonishments. She wanted to be an example for the others. She said: “In Poland people can be poor but they cannot be terrorized”. On 7 August 1980, just five months short of her retirement, she was dismissed.

On 14 December the shipyard workers went on strike and her reinstatement was to become the first of the strikers’ 21 conditions. On 16 August, despite a preliminary agreement having been signed with the management, she stood in front of the shipyard gates to stop the workers going home and exhorted them not to interrupt the protest, thus contributing to the beginning of a solidarity strike with the other companies embroiled in industrial unrest. She was part of the executive of the Inter-company Strike Commission (MKZ).

On 1 September she joined the executive of Solidarność in Danzig. The autumn of 1980 witnessed her first clashes with Lech Wałȩsa, whom she accused of having “dictatorial tendencies”. Their conflict came to a head in July 1981, when Anna failed to be elected as a delegate to the First Solidarność Congress. In the autumn she signed the memorandum of association of the Clubs of the Independent Republic “Freedom, Justice, Independence” set up, among others, by Zbigniew Bujak, Jacek Kuron and Adam Michnik. On 18 December 1981 she was arrested and imprisoned until 24 July 1982.

After her release she did not take part in the framework of the underground trade union, but organized hunger strikes, took part in meetings in the churches and wrote protests and declarations. During one hunger strike organized in her own house to ask for the Pope to be able to come to Poland, she was arrested with her son.

During the inquiry, she was forced to undergo a psychiatric examination and was defined as “an irresponsible firebrand”. Sacked by the shipyards, on 30 March 1983 she was given a year and three months’ suspended sentence. On 4 December 1983 she was again arrested and held in jail for four months. In the following years she continued to take part in protests and hunger strikes. She refused to accept the Round Table proceedings and agreements, considering them a betrayal of the ideals of Solidarność. She received numerous national and international awards. She tragically perished in the air crash of Smoleńsk on
10 April 2010, while she headed to the solemn ceremony dedicated to the Katyn victims.