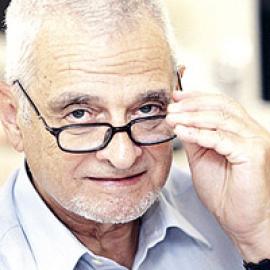 Ion Vianu was born in Bucharest. He graduated in medicine and went on to work in the psychiatry clinic of the Faculty of Medicine. In November 1976 he wrote an article entitled Psychiatria, antypsychiatria, hiperpsychiatria, the first study to be published in Rumania on the abuse of psychiatry. Despite being censored, the article makes clear allusions to the situations in Rumania and the USSR and thus opened the debate on the use of psychiatry as a political weapon.
In 1977 he joined the group of dissidents that revolved around Paul Goma and presented facts and details to the public that testified to the use of psychiatry as an instrument of repression. This cost him numerous interrogations and ultimately his job at the Faculty of Medicine.
In July 1977 he moved to Switzerland, where he came into contact with the International Association on the Political use of Psychiatry. For many years he was a member of the Association’s executive committee and from 1992 to 1995 he was its Chairman. With the Association he launched an international campaign in defence of dissidents detained in psychiatric hospitals in the USSR, Rumania and other totalitarian states. In the Eighties he contributed to the Philadelphia magazine “Agora”, promoting the work of the Paris-based Human Rights Defence League – of which he is a member. On 22 December 1989 he broadcast an appeal over Radio Free Europe exhorting the Rumanians to take to the streets.
On his return to his native country, Ion Vianu became a writer and has helped keep the international community informed about the Communist regimes’ criminal use of psychiatry. He has exhorted Rumanian doctors to examine these practices, because, despite testimony from victims and doctors alike, the issue of repressive psychiatry has still not been tackled by today’s new democratic government. In defence of democratic values, he also continues to stand up for the rights of homosexuals, the Roma people and against anti-Semitism.