fearless critic of the Soviet regime in East Germany 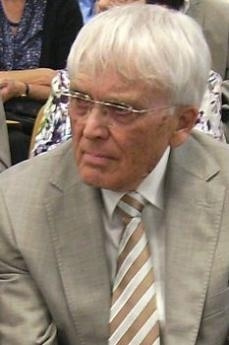 Reiner Kunze was born in Oeisinitz, in Saxony. His father was a miner. He studied philosophy and journalism in Leipzig. From 1955 to 1959 he worked as an assistant lecturer in the same university. He joined the SED, East Germany’s Socialist Unity Party [Sozialistische Einheitspartei Deutschland] but, also influenced by the Czech poets, he soon began to express doubts about the regime in power in his country. And he thus began to feel the long arm of the Stasi. Forced to leave the university, he worked as a mechanic and a farm labourer.

In 1961 he married the Czech doctor Elisabeth Littnerovà and adopted her daughter Marcela. In 1962 they moved to Thuringia and Reiner began to write. Due to his fearless criticism of the regime, he was unpopular with the Politburo: only a handful of his works were published in the GDR, whereas almost all of them were smuggled into and printed in West Germany. Others became known in East Germany thanks to the samizdat, and were circulated in the same way in Poland and Czechoslovakia.

Kunze was expelled from the Writers’ Union, constantly spied on and subjected, along with his wife and daughter, to countless interrogations. In 1976 he was offered the alternative of leaving the country or facing a political trial, for “subversion”. He wrote: “By then I had taken it for granted that they would arrest me. I had never thought of moving away”. In particular his volume of short essays The wonderful years (Die wunderbaren Jahre) was under suspicion, since it illustrated the methods used by the authorities to impose “socialization” on a large scale. The expulsion that same year of the singer/songwriter Wolf Biermann had provoked strong protests and demonstrations of solidarity on the part of numerous intellectuals, both in the GDR and abroad; these reactions had persuaded the authorities not to put Kunze on trial for fear of an international protest and to put pressure on the writer to go into “voluntary” exile.

On 13 April 1977 Kunze and his family crossed the border between East and West Germany. “I am neither a martyr, nor a hero”, he was to say later, “staying behind would have meant prison”. In the same year he was awarded the prestigious literary “Georg Buchner Preis”. Speaking about his work he said: “I have never written for political reasons, but reality inevitably slips into every text and many books take on a political tone”. Precisely because his works do not deal directly with political issues, he is defined as “the poet of gentle dissent”.

On his arrival in West Germany he first lived in Munich and later in Passau, where his wife found a job as an orthopaedic doctor. He was admitted to the Berlin ”Academy of Arts” and to the ”Darmstadt Academy of language and poetry”. His contribution is also important as the translator of the works of numerous Czech poets, and especially of Jan Skacel, a great friend of his, to whom he had been prohibited from writing from 1969 to 1981.

In December 1989, shortly after the collapse of the Berlin Wall, Kunze was re-admitted to the ”East German Writers’ Association”, which later joined the western “Pen Club”. Kunze’s works have been translated into thirty languages and he has received numerous German and international awards. On his experience of life under the communist dictatorship he wrote:

"At the beginning I too was invited to collaborate with the Stasi. In the deeds that concern me, you can read (in 1964): 'From a conversation with him it became clear that he is not suitable for collaboration’. Every single citizen of East Germany fell inevitably into the temptation of taking part in that treacherous game: on the other hand, the road to success was only clear for those who said yes, to those who were willing to insinuate themselves into that system of denunciation and intrigue... But anyone with healthy moral principles will never lower themselves to such compromises. There are limits that cannot and must not be exceeded."

The film presents three writers: Hans-Joachim Schädlich, who was expelled from the GDR; Ulrich Schacht, who was "bought" by a GDR prison; Reiner Kunze, who obtained "permission" to leave the GDR. On the example of these three literary figures, the director tries to understand the reasons that led numerous artists to move to West Germany. Schädlich was not allowed to live in the GDR because his writings dealt with numerous taboos typical of that system; Schacht considered both anti-fascism and anti-communism "necessary democratic virtues"; Kunze believed it was unreasonable to write "against one’s own conscience". The three writers were presented in their current situation (1986), they talk about their own books, about the right of each of us to do as we please; in addition they discuss the cultural life of the two States and the future of the German nation.