the legend of Solidarnosc 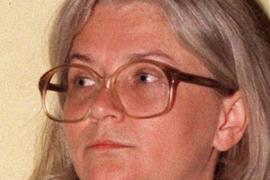 Alina Pienkowska, the "Legend of Solidarność” as she was called, was born in 1952 in Danzig. Her father, a worker in the Lenin quarter of Danzig, had joined the strikes of 1970. As Pienkowska recalls: "It was precisely then that I became sure about the lies of the system” (1), because, by listening to and reading about the official reports on the events in the Coast, she became aware of the censorship and deception of the media. Furthermore, as she worked as a nurse in the emergency unit, she could get to know the drivers of the ambulances that had transported the strikers wounded by the army, who told her about the violence of those day, which no one talked about.

At the beginning of 1977, Alina went to an uncle's in London and there she became aware of the existence of a democratic opposition in her country. When she went back to her homeland, she started looking for the publications of the underground press. "During my shifts I overtly read the clandestine magazines Bratniak (Brother) (2) and Robotnik (Worker). Once a colleague pointed out to me that in those magazines there was nothing about the bad situation in the shipyards and then I decided I would write something myself. The names of the contributors included Bogdan Borusewicz (4), I picked his name and contacted him”. This way, in 1978 she started her ties with the democratic opposition and her personal bond with Bogdan Borusewicz.
In June 1978 she entered the Founding Committee of the Free Unions of the Coast. In the first issue of magazine Robotnik Wybrzeza (The Littoral's Worker) (3) an article by here appeared under the signature AW. Afterwards she joined the editorial staff and since the second issue her name and address were included in the colophon. In her articles she reported the bad work conditions, the causes of professional diseases and the sluggishness of bureaucracy.She also dealt with distributing the underground press and the organization's flyers and organizing training meetings for the workers. As a punishment, nearly at the end of 1978 she was moved to the infirmary of the Elmor factory, and her pensions contributions were suspended.

In 1979 she was among the signatories of the "Charter of Workers' Rights”, containing the programme of a free trade union.

In March 1980 she risked to be fired because she was accused of gross violations of job discipline and absenteeism. Although 311 people signed a petition in her defence, in April a disciplinary measure moved her to the infirmary of the Danzig shipyards. Aftet the start of the strikes at the shipyards, on 14 August, she managed to inform Radio Europe about the striker's demands and to spread a call to the Danzig population with the request for food aid to the workers who occupied the shipyards. Later she was appointed as head of the Strike committee of the infirmary.

On 16 August, after the signature of the deal between the people on strike and the direction of the Lenin shipyards, following which Wałȩsa had decided to suspend the strike, together with Ewa Osowska and Anna Walentynowicz, she picketed gate number three to stop the workers who were getting back home, calling for their duty of solidarity with the other firms of the Coast, which had gone on strike in the meanwhile and, without the support of the shipyards, would be powerless before the authorities. These women's action was determinant and workers went back to the Shipyards to continue the protest, which from then on became a "solidarity strike", after which came the name of the Solidarity movement: "Solidarność”.

In the night between 16 and 17 August she was among the authors of the  21 demands; (6) and she signed in particular demand no. 16 (7) , on the healthcare service. She was a member of the Presidium of the Inter-firm Strike Committee and on 31 August she was among the signatory of the deals. Then she entered the Presidium of the Presidium of the Inter-firm Founding Committee of Solidarność Workers' Union. In 1980 she led the strike of the healthcare service in the Danzig region. She set an example for people getting on strike, most of whom were young, who would say: "As that slim blonde with a baby had no fear of struggling not only for her own rights, but for justice for all as well, we couldn't be cowards".

In July 1981 her nomination as head of Solidarność in the Danzig region was proposed, but she herself withdrew it out of contrasts with Lech Wałȩsa and joined the Regional Directive Committee. In the years 1980 – 1981 she belonged to the group gathered around Andrzej Gwiazda, who opposed Lech Wałȩsa's leadership as he considered it as authoritarian and focused on one man only, and in November 1981 she resigned from the Regional Directive Committee out of protest against the expulsion of some people, including Andrzej Gwiazda and his wife Anna, who had distanced themselves from Wałȩsa's line. Although they remained in the union, they gave rise to a grouping that demanded a better democratization of the union's hierarchy and more internal debate.

On 13 December 1981 Alina was interned and she was released only in July 1982. After her release, soon she worked for the relief of the victims of repression, and she found and managed the apartments for the activists of underground Solidarność, including Borusewicz himself, who has managed to escape arrest and lives in the underground  On 3 December 1984, with the complicity of priest who is also a friend, in one of those flats she secretly got married with Borusewicz, from whom in the meanwhile she had a daughter and who was wanted by police.

She was repeatedly halted by the police, she was searched and interrogated many times. In 1986 she was among the founders of  Solidarity Social Foundation, which has the task of managing a million dollars received from the US Congress by Solidarność to buy medical equipment for the hospitals in Danzig, Warsaw, Cracow and Legnica. She refused to take part in the works of the Round Table (8) because she thought the Healthcare service was under-represented, and, like Anna Walentynowicz, Andrzej Gwiazda and others, she believed that they were premature, because the position of Solidarność inside the country seemed to her still too weak. She would deem it better to strengthen it through a series of demonstrations and strikes increasing the delegates' negotiating strength.

On 3 May 2006 she posthumously received the Great Cross of the Order of Polish Rebirth and the titles as honorary citizen of Danzig. In 2003 she was dedicated the movie Historia pewnego życia (Tale of a particular life) directed by Andrzej Titkow.

(2) Bratniak, Bratnia Pomoc (Brother, Brotherly Aid), name of an underground student magazine drawing inspiration from  the underground groups that arose in the Polish universities in the XIX Century with the aim at helping economically the poorer students through scholarships and by setting up refectories. Moreover, they set up alphabetization and study courses in the cities and the countryside to counter the work of erasing of the Polish identity pursued by the occupiers. These organizations existed officially also between the two world wars in many universities. After the outbreak of WW2 in the whole Polish territory, underground universities were set up, and within them there were these underground groups of Brotherly Aid to the students. They got out in the open shortly after the war, to then be banned in  the Fifties and turn again into underground student groups. They were reborn officially after 1980 and today they are active in most all Polish universities.

(3) Two-weekly magazine published since 1977 by the Committee of Aid to the Workers (KOR). In its title it refers to underground magazine “Robotnik” published since the half of XIX century during the time of the partitions of Poland. It was linked to the underground Polish Socialist Party.

(4) Bogdan Borusewicz (1949), one of the prominent figures in the democratic opposition against the regime. Since 1976 he was a member of KOR, and, since 1978, he is one of the great people behind the independent Unions and an editor of underground magazine “Robotnik”. He was one of the great men behind the strikes of Gdanks in 1980 and he joined the Presidium of Inter-firm Founding Committee of Solidarność. He would leave the Union with others in Summer 1981, in opposition to Lech Wałȩsa, protesting bis authoritarian, one-man leadership. After the passing  of the State of War he managed to escaped arrest and he organized the underground structures of Solidarność.He was arrested in November 1986. He was released in the same year following an amnesty law. He did not join the Round Table, thinking it was premature. He currently is the President of the Polish Parliament.

(6) The workers on strike inside the Lenin Shipyards of Gdansk wrote down 21 demands, their 21 requests to the regime, in which they asked, among else, for freedom of establishing their own unions, freedom of strike, freedom of expression and press, the abolition of censorship, the release of all political prisoners, the abolition of crimes of opinion, the reform of wages and pensions.

(7) Demand no. 16 asked for a reform of the whole healthcare system to make it more efficient and ensure adequate assistance to all workers.

(8) Round Table: talks between the government authorities and the representatives of Solidarność, started on 6 February 1989 and ended on 5 April 1989, that prompted system change in Poland.