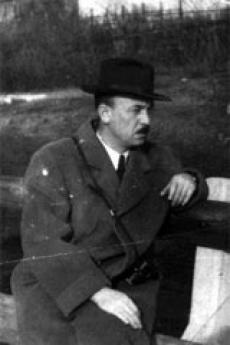 A lawyer like his father, from whom he inherited his liberal ideas, Ferenc Donath was born into a Jewish intellectual family in Jaszrokszallas, Hungary. In 1930 he enrolled at Budapest University to study law and declared himself a Marxist, joining the underground Communist movement. In 1934 he joined the “Hungarian Communist Party”, involved himself in the life and fate of peasant farmers and got to know several popular writers, becoming close friends with some of them. In 1939 he helped form the “National Farmers Party”. Arrested in 1940 because of his Jewish roots, after a few weeks in prison he was sent to a forced labour camp until December. In 1942 he started working underground: he took part in the foundation of the Communist Party, joined its political directorate, edited the party press and organized provincial committees. In 1944 he participated in negotiations between the opposition groups. In 1945 he was on the commission for agrarian reform, co-authored the decree on land distribution and became under-secretary at the Ministry of Agriculture. Elected a member of the Central Committee of the Hungarian Communist Party, in 1948 he gave up his post as under-secretary due to clashes with the directors and became president of the party secretariat. In 1950 the Central Control Commission launched an investigation into his activities. In January 1951 he was arrested along with his wife and his parents and in December of the same year he was sentenced to 15 years’ detention. He spent 3 and a half years in solitary confinement, while his wife was detained without trial. He was released from prison in 1954, when his sentence was annulled. Donath then stayed on the sidelines of public life until the 20th Congress of the Soviet Communist Party, when he joined Imre Nagy’s reformist group. After 28 October 1956 he joined the “Hungarian revolution”, convinced of the need for a new, multi-party system. On 23 November he was deported to Rumania along with other members of Nagy’s government who had applied for political asylum in the Yugoslav embassy after Soviet tanks had invaded Budapest. In 1958 he was tried together with Nagy and sentenced to 12 years in jail for espionage. Two years later he was released thanks to an amnesty. He never returned to active political life and only in the Seventies did he join the protest against the imprisonment of the representatives of Charter ’77. In 1979, on the strength of his great moral authority, he was appointed chairman of the editing committee of the Book in Memory of Bibo. He wrote regularly for the underground magazine “Beszelo” and helped to distribute it. In 1985 he was among the promoters and organizers of the ”Monor meeting”, a secret 3-day summit of representatives of Hungary's main opposition groups to coordinate strategies, exchange views, and present specific proposals for the country's future. Ference Donath was to die just a few days later.