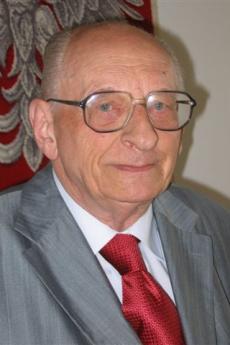 A historian and political journalist, Władysław Bartoszewski was born in Warsaw in 1922. In September 1939 he played his part in defending the city from the German invasion as a stretcher-bearer. His father was a bank executive while members of his mother’s family were heavily involved in Poland’s independence movements.
On 19 September 1940 Władysław was arrested by the Nazis and sent to the Auschwitz concentration camp, but thanks to the intervention of the Polish Red Cross he was released on 8 April 1941. From the autumn of 1941 to 1944 he studied Polish philology at Warsaw’s clandestine university and in 1942 he joined the Catholic underground organization “Front for the Rebirth of Poland”, founded by Zofia Kossak. In August 1942 he was sworn into the Home Army (AK), the partisan army of the Polish Government in exile in London.

From the end of 1942 to 1944 he worked in the Department of the Interior of the Government in Exile’s Delegation in Poland, where his job was to provide aid for prisoners and to collect and forward all possible documentation about Nazi crimes to London. He took part in the Committee for Aid to the Jews and in a similar group codenamed “Zegota”, where in 1943 he organized support for the insurgents of the Warsaw Ghetto. From 1 August to 2 October 1944 he participated in the Warsaw uprising and stayed underground until October 1945 as a member of the anti-communist organization “NIE”. In the autumn of the same year he started working for the Central Commission for the Documentation of Nazi Crimes in Poland and at the beginning of 1946 he joined the Popular Party (PSL), which opposed the Sovietization of Poland.

On 15 November 1946 he was arrested and charged with espionage; released on 10 April 1948, he was arrested again on 14 December 1949 for anti-Soviet activities and on 29 May 1952 he was sentenced to 8 years’ imprisonment for spying. He was released from prison on 16 August 1954. On 2 March 1955 the Military Tribunal declared the charges against him unfounded and he was officially rehabilitated. In 1957 he began contributing to the Cracow Catholic intellectual weekly “Tygodnik Powszechny”.

As from the early Sixties he maintained contacts with young German members of the Pax Christi movement, committed to promoting reconciliation between Poland and Germany. In 1967 he published This man is my countryman. Poles who rescued Jews 1939-1945. From 1974-1975 he organized underground debates in Warsaw on Poland’s recent history. From 1973 to 1981 he lectured at Lublin’s Catholic University and became a pivotal figure for the youngsters that gravitated around the underground monthly “Spotkania” (Meetings). He was signatory to numerous petitions and protests against the regime, including, in January 1977, the letter of protest against the repression of the workers in Ursus and Radom. On 22 January 1978 he was among the founders of the Flying Universities (underground university courses) where he lectured on the history of World War II and on relations between the Poles and the Jews.

On 20 August 1980 he signed the appeal drawn up by 64 intellectuals in support of the strikes along the Baltic coast and in September of the same year joined Solidarność. On 13 December 1981 he was detained, but released a few months later, on 28 April 1982, following the protests of numerous German, Austrian and Jewish intellectuals and politicians.

From 1983 to 1990 Władysław Bartoszewski held courses at Munich, Eichstatt and Augsburg universities. In the Eighties he published numerous works on the underground and foreign press, in particular certain fundamental texts on the history of the Second World War and the history of Polish Jews. Constantly under surveillance by the secret services, also during his trips abroad, he always preserved the attitude of a great humanist and free thinker: he resolutely rejected the use of violence and always tried to build bridges for dialogue. With his work as an historian he promoted reconciliation between Poles and Jews and between Poles and Germans, and at the same time kept the memory of the experience of the Underground Polish State, the Warsaw uprising and the Ghetto alive, as well as that of the crimes of the Nazi and Communist totalitarian regimes. In 1986 he received the German Publishers’ Peace Prize. On that occasion he said: “For me peace is inseparable from the freedom of every individual and of all social groups: freedom of faith, of thought, freedom to choose where and how to live one’s own life, one’s own political and economic system. Freedom of speech, freedom from fear. We will never manage to achieve lasting peace without guaranteeing everyone all these indispensable conditions of life”.

Since 1990 he has been president of the International Council of the Auschwitz Museum and in 1991 he received the honorary citizenship of the State of Israel. From 1990 to 1995 he was Poland’s ambassador to Austria and then Minister for Foreign Affairs and a senator. He has received the highest honours in Germany, Austria, Estonia, Lithuania, Hungary and Spain. In 1995 he was awarded Poland’s highest honour: the Order of the White Eagle.

In 1966 the Yad Vashem Memorial nominated Władysław Bartoszewski “Righteous among the Nations” for his efforts with the “Zegota” group in defence of Warsaw’s Jews.

Władysław Bartoszewski is honoured in the Gardens of Warsaw e Yad Vashem.