musician and poet who criticized East Germany for militarism and totalitarianism 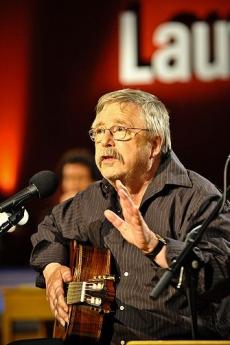 Wolf Biermann was born in Hamburg. His father, who was a member of the Communist anti-Nazi opposition, died in Auschwitz in 1943. Convinced that Federal Germany had not distanced itself sufficiently from its recent past, in the spring of 1953, at the age of 17, Wolf moved to the GDR, where he completed his secondary education. He then started a degree in political economics at Berlin University, but in 1957 he interrupted his studies to become assistant director to Bertold Brecht at the Berliner Ensemble theatre. In 1959 he went back to university, but this time to study philosophy and mathematics. In 1962 he made his debut as a musician and poet: his works are inspired by the tradition of the French and German singer poets: Villon, Brecht, Brassens. His application for membership of the SED (Socialist Unit Party of Germany or Sozialistische Einheitspartei Deutschland) was turned down. He was also denied a degree on completing his studies, probably because the Party had negatively judged his work as “detached from life and entirely inward looking”. He was banned from performing in public, but refused to give up his artistic production. In 1964 he publicly announced his support of professor Robert Havemann, the famous scientist expelled from the Party and from Berlin University. The following year the SED attacked him once again due to the publication in West Berlin of his first volume of poetry The wire harp (Die Drahtharfe), and, in spite of protests from the West, he was categorically forbidden to perform and to publish. This ban was to remain in force until his expulsion from East Germany in 1976. As from 1965 his works, books and records were published in the West, where they received a string of awards. In April 1971 the première of his work Der Dra Dra was staged in Munich. While his interviews and an occasional television appearance surfaced in the West, in the GDR the silence imposed by the regime continued. Nevertheless, thanks to the underground press, he enjoyed great popularity among readers and among enthusiasts of his songs. He was a friend to numerous intellectuals, who shared his strong condemnation of the way the regime oppressed the population, but he continued to identify with Marxism and Communism, considering himself an anti-Fascist, anti-militarist and anti-capitalist. From 1965 the Stasi took intense interest in his activities, to the extent that his file consisted of a hundred volumes totalling 40,000 pages. As from 1973 the Party tried to get rid of this inconvenient poet and acute critic of the system. In the autumn of 1976, despite the ban still in force, he staged a concert in Berlin. On 13 November he travelled to Cologne at the invitation of the mechanical engineering and metal workers’ trade union and he sang to an audience of seven thousand people. On 16 November the Party’s Politburo withdrew his citizenship of the GDR. The decision provoked a wave of protests not only on the part of the country’s most eminent cultural figures, but also of the man in the street. The regime’s reaction was swift: a large number of intellectuals were arrested - including Havemann – and numerous writers ended up in court. The result of this operation was that numerous cultural figures fled to the West. The events of 1976 caused Biermann a profound crisis: without his knowledge, the Stasi continued to keep him under control through the manager that had managed to gain his trust and who, by handling his contracts, influenced his public artistic career, while right-wing western circles did not spare him criticism and accusations. While the new situation in which he found himself required him to take a clear political stance, Wolf feared being used and continued to consider himself a socialist and to criticize western societies. In spite of these difficulties, he held numerous concerts and was an esteemed poet and singer/songwriter. In the Eighties he was particularly affected by the events in Poland, to which he dedicated several poems, essays and songs. Right from the beginning he took an active part in the events of 1989. On 4 November, Honecker’s successor, Egon Krenz, prohibited him from participating in the demonstration in Berlin’s Alexanderplatz, which marked the beginning of the end of the Wall. The barrier that had separated East Germany from the West, finally collapsed under the pickaxes wielded by Berlin’s youth on 9 November. Already on 1 December, Biermann sang in Leipzig before a crowd of four thousand people and the concert was broadcast live on television and on the radio. A few days later Wolf Biermann was received by the minister of culture Keller, who, in the name of the GDR, apologized for the wrong inflicted on him in 1976. In the years that followed, Wolf Biermann became a critical observer of the process that brought Germany together again. In September 1990 he supported the human rights activists’ symbolic occupation of the old Stasi building and, along with them, he demanded that the secret police files should be made accessible to everyone. He then settled back into his native town and now lives between Hamburg and France.