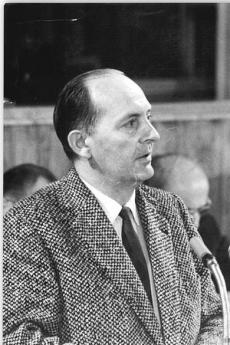 Robert Havemann was born in Munich, his parents were both painters and his father was also a teacher. Robert studied chemistry in Munich and Berlin. In 1932 he became a member of the German Communist Party. In 1933 he joined the movement that opposed the rise of Nazism, first in the joint communist and social-democrat organization and then in the European Union group, which he founded himself in July 1943. The group focused above all on sheltering numerous Jews and on maintaining contacts with prisoners in the forced labour camps. In the autumn of 1943 fourteen members of the Union, including Havemann himself, were arrested and sentenced to death. Certain scientist friends of his managed to postpone his execution, on the pretext that their colleague was conducting “scientific research of great military importance”. In his cell on death row, where he was obliged to continue this research, Robert installed a radio antenna from which he successfully broadcast a daily bulletin for his fellow prisoners. As the Soviet troops approached, he started to produce explosive material for a possible battle against the SS. When the war was over, in July 1945 the Soviet and East German communists appointed him director of a leading scientific institute in the American sector of Berlin. The Soviet secret service asked him to provide them with data on the members of the social-democratic organization known as “Start again” who had opposed setting up the Unity Party (SED), but the scientist refused. In 1948 the Americans removed him from his post as director and in 1950 they dismissed him from the institute for criticizing the creation of the hydrogen bomb. Havemann then moved to the GDR, where he was nominated director of the Physical Chemistry Institute of Berlin’s Humboldt University and the same year he joined the SED. In 1956 he became a “non-official member” of the political police (Stasi), charged with maintaining contacts with western scientists to try to win them over to East Germany’s cause. In 1959 the Stasi started to keep him under surveillance, no longer considering him reliable. The 20th Soviet Communist Party Congress and the blanket of silence that covered this event in the GDR greatly perturbed Havemann and led him to criticize the system and demand the de-stalinization of the country. In 1956 he publicly expressed support for the Hungarian revolution, even during party meetings. In 1962 he held a conference in which he condemned the regime’s ideological dogmatism. Being unable to publish the conference, he typed out the proceedings on a typewriter and distributed copies of it in Germany and abroad. This led to his expulsion from the governing council of the university’s party organization. Between 1963 and 1964 he held his last lessons, attended by over a thousand students from all over East Germany. In them he spoke, among other things of personal freedom, which “should mean being able to act according to one’s own individual aspirations, without being restricted or stifled by directives, orders and axioms”, also and above all within a socialist framework. Glimpsing a dangerous disassociation in these words, the SED expelled him from both the university and the party. In January 1964, the secret police started to take an active interest in him, subjecting him to frequent searches and interrogations. In the Sixties and Seventies he devoted himself to writing, gathering around him a large group of opponents, and he also kept in touch with western euro-communists. In 1968 he defended the reforms being implemented in Czechoslovakia, while his two children paid for their participation in protest demonstrations against the Soviet invasion with spells in prison. In November 1976 he protested strongly against the expulsion from the country of a close friend, the singer/songwriter and poet Wolf Biermann; this resulted in his house arrest, a sentence that was not revoked until May 1979. Despite close surveillance by the Stasi, in February 1977 he met Lucio Lombardo Radice, a member of the Central Committee of the Italian Communist Party. In 1979, after a show trial, he was ordered to pay a ten thousand-mark fine for publishing his works in the West. Havemann refused, however, to be intimidated and once again spoke out with the text Ten arguments for the 30th anniversary of the GDR, in which he criticized the exacerbation of penal law, and especially paragraph 106 on the ”instigation to anti-State activities”, demanding that Parliament should admit the opposition, freedom of speech and the release of political prisoners. In 1980 he published his last book, Tomorrow. Industrial society at a crossroads. Criticism and real utopia, in which he takes stock of the catastrophes and crises of the 20th century and concludes that neither capitalism, nor socialism are a real solution to the problems of mankind. In the closing years of his life Havemann supported the pacifist movement. On 20 September 1980 he wrote an open letter to Leonid Brezhnev, signed by numerous eastern and western European intellectuals, in which he expressed the theory of the movement. He supported the need for Germany to be re-united and the right of every man to freedom of thought and expression. Towards the end of 1981, he wrote the Berlin Appeal, in which he reiterated his demands to the regime. The appeal was published on 25 January 1982 and Robert Havemann died in April of that same year. In spite of the Stasi’s counter measures, his funeral was attended by hundreds of people, who turned the occasion into a protest demonstration against the regime.
On 28 November 1989, immediately after the fall of the Berlin wall, he was publicly rehabilitated by the German authorities.