prolific Bulgarian writer and dissident against the pro-Moscow Communist regime 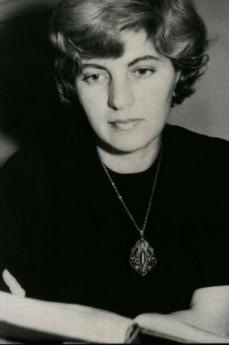 She was born in a small provincial town in Bulgaria. She studied Slavic philology, first in Sofia and then in Leningrad and Moscow. On her return to Bulgaria she joined the editorial staff of the monthly magazine of the Bulgarian Writers’ Association.
In 1962 she joined the editorial staff of the Association’s publishing house, where she tried to publish the works of young authors who had fallen out of favour with the censors.

In 1963, after the tirade against the country’s intellectuals by the Secretary of the Bulgarian Communist Party, Zivkov, the publishing house suspended publications and Blaga left her job in protest and moved to another publishing firm. In 1965 she published her first book, Journey to Oneself.

During the Vietnam war she visited that country several times, adopted a young Vietnamese orphan and then published several works resulting from her observations.

After the suicide in Prague of Jan Palach and the invasion of Czechoslovakia, she wrote her poem Jan Palach, which she managed to smuggle to the dissidents in Prague.

The Seventies marked the peak of her poetic production, with the publication of a number of books that re-awakened the Bulgarians’ conscience. Along with her husband, the literary critic Jordan Vasiliev, in 1975 she published Bagrian’s youth and Black days and white days, a sort of biography of the great Bulgarian poet Elisavieta Bagrian. Since the text mentions authors banned by the propaganda, the books were confiscated and the authors accused of “falsifying history”. In 1981, after four years’ attempts, she successfully published Face, a metaphor of the totalitarian regime and the void it provokes in people, in which she wrote: “You don’t know the secret for making a career for yourself? (…) you can only get on if you have a stain on your conscience! If you have a stain, then you are a man to be counted on. Of course, you will obey! (…) a stain is like a lift button. Someone presses it and up you go. But if you don’t behave, they press it again and down you go. It’s simply a question of knowing how to make the best use of your own stain!” Despite the cuts made by the censors, the book was confiscated anyway, slammed by the critics, who accused the author of being on the payroll of a foreign power. The few remaining copies were transcribed on the typewriter and distributed underground throughout the country.
During the first free demonstration in Sofia, in November 1989, alongside the banners the crowd raised two books in the air: Fascism by Zelu Zelev and Face.

In February 1989 Blaga Dimitrova was one of 102 Bulgarian intellectuals to sign an appeal in defence of Václav Havel.
On 5 May 1989 her husband was arrested because he was the chief editor of the journal “Democracy”, an organ of the “Association of Democratic Forces”.

At the invitation of Mitterand, on 2 June Blaga Dimitrova managed to attend an international conference on human rights in Paris.

With the end of the Communist region she was elected to parliament and on 19 January 1992 she became vice president of the Bulgarian Republic. She resigned in 1993.

Her work has been translated into numerous languages and has also received some of Europe’s most prestigious literary prizes.