historian and writer who resisted censorship and soviet repression in Poland 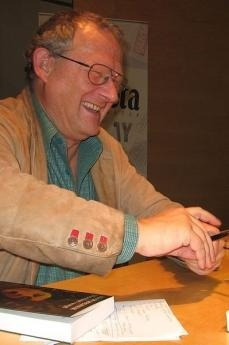 The historian and writer Adam Michnik was born into a Communist family in Warsaw. His father had been a member of the Western Ukraine Communist Party and, before the war, this had earned him two spells in Polish jails (at that time the lands of Western Ukraine belonged to Poland). In 1969 he left the PZPR, disillusioned with real socialism. His son Adam was thus brought up in the tradition of left-wing radicalism. At the age of 11 Adam joined the Polish Scout Movement headed by Jacek Kuron. The movement combined a scout education with a non-conformist attitude to Marxist ideology, which was to have a strong influence on Adam Michnik’s future. In the early Sixties he formed a student political debating society, which, before even finishing high school, earned him a public rebuke from the party leader, Gomułka. At university Michnik was active in the group of so-called revisionists and became leader of the student opposition. During meetings he was prone to putting banned topics up for discussion and asking party representatives awkward questions. In 1965 he spent two months in jail and was suspended from the university. A second suspension ensued the following year, despite a petition in his favour signed by more than 150 students and lecturers. In 1968 he was definitively expelled from the university for taking part in a student protest against the censors, who had forbidden the staging of The Ancestors, by Mickiewicz, who was accused of expressing anti-Russian sentiments. Arrested yet again, Michnik was sentenced to three years imprisonment. The protest organized in his favour was to spark student protests all over Poland. He was released from jail under an amnesty in 1969 and got a job as a welder. In 1973 he graduated from Poznań University. He soon became a magnet for a new group of young intellectual dissidents who had close contacts with the Kultura circle of Polish exiles in Paris. Michnik signed numerous appeals and letters of protest against the regime. In 1976 he wrote his most famous book: The Church, the Left and Dialogue, in which he questioned the anti-clerical ideas of the left-wing democratic opposition and suggested that Catholic circles should work together against the communist dictatorship. The same year he made a long trip to the West, during which he met politicians and journalists in Italy, France and Germany, obtaining political support. His conference on The new evolutionism pronounced in Paris was fundamental; in it he rejected both conspiracy and revolution and all forms of collaboration with the authorities, and stated that the opposition should dialogue with civil society, not with the regime; he also supported the need for a bond between intellectuals and workers and expressed his appreciation for the Church’s attitude to the defence of human dignity and civil liberties. In 1977 he returned to Poland and joined the KOR, and for this reason was again arrested. After his release in the second half of the Seventies, he worked in the KOR and was one of the founders of the underground publishing house Nowa and of the political quarterly Krytyka. Despite over a hundred 48-hour detentions and regular beatings, Michnik was irrepressible. He forged relations with the Hungarian and Czechoslovak oppositions and on two occasions took part in secret meetings with representatives of Charter ‘77. From 3 to 10 October 1978 he joined a hunger strike being staged in the church of the Holy Cross in Warsaw in solidarity with the Czechoslovak dissidents in prison. In August 1980, during the Baltic strikes, he was arrested along with other opponents, all released, at the request of the workers, after the signing of the Danzig agreements. At the end of 1980 he joined Solidarność’s Commission of Experts for the Masovia region. He wrote numerous articles on the “Polish experiment”, in which he realistically took the country’s geopolitical situation into account and supported the trade union’s moderate stance. On 13 December 1981 he was interned. From internment he supported the formation of Solidarność’s underground structures. On 3 September 1982 he, and others, were charged with preparing a violent uprising against the regime: for this he was returned to prison for a further two years and refused the offer of freedom in exchange for an undertaking to emigrate...

In July 1984, after 31 months in jail, Michnik was released under an amnesty. He immediately resumed his opposition work, taking part in protests and writing in the underground press. In February 1985 he was arrested again and sentenced to three years. He came out of prison in July 1986 following another amnesty. He moved to Danzig where he became one of Lech Wałȩsa’s closest advisors. In May 1988 together with Zbigniew Bujak he was awarded the Kennedy Prize for Human Rights. The award was handed to him by senator Edward Kennedy, who had travelled to Poland especially for the occasion. Michnik kept a close watch on the changes taking place in the Soviet Union under Michail Gorbachev, hoping that they would weaken the system and thus have positive fallout on the entire Soviet bloc. At the beginning of 1988 he wrote an open letter to Soviet artists and intellectuals, in which he expressed the hope that the on-going move towards democracy might lead to improvements in relations between the two countries. He also appealed to men of culture to publicly condemn the Katyn massacres. He was the architect of the negotiations started at the end of 1988 between Solidarność and the authorities, but in the eyes of general Jaruzelski he was, along with Jacek Kuron, the system’s greatest enemy and for a long time the authorities refused to accept his presence at the negotiating table. He participated anyway in the proceedings of the Round Table (from 6 February to 5 April 1989) and was one of the architects of the mediation. After the agreement had been signed, Wałȩsa appointed him chief editor of the Gazeta Wyborcza (Electoral Gazzette), the official opposition newspaper, the first number of which came out on 8 May 1989 with an edition of 150,000 copies. The Gazeta took the regime completely by surprise; none of them had imagined that their opponents would manage to bring out a brand new newspaper – which was to play a vital role in the campaign for Poland’s first semi-free elections – in just a matter of weeks. On 4 June Michnik was elected to Parliament. In 1991 he did not stand for re-election, despite having played an important role in the formation of Tadeusz Mazowiecki’s government. He devoted himself entirely to journalism and continues to direct Gazeta Wyborcza, which over the years has become Poland’s number one daily. Michnik has received numerous international awards, including the European Journalists’ Association prize (1995), the Imre Nagy medal (1995) in Hungary and the Francisco Cerecedo prize for journalism in Spain(1999). He is the only Pole to figure in the International Press Institute’s list of the 50 “Heroes of freedom of the press” published in 2000. In 2001 Michnik received the Erasmus award for his contribution to the development of European society and culture. In 2007 he was chosen by the European Union as a mediator for the freedom of information in Georgia.