a life dedicated to others, after the World War II he stayed with the wounded soldiers to assist them 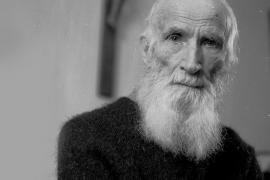 Jan Zieja was born in 1897 in the village of Ossa, in Opoczno County (Central Poland). Starting from early childhood, he was determined to pursue an education – initially at home and in the presbytery, then, in 1907, at a Warsaw school. At the age of 18, he joined the seminary in Sandomierz. Having received his ordination from the Catholic Church, he initiated his studies in theology, which he had to interrupt, however, to join the army in May 1920. While fighting in the Polish-Bolshevik War, the young priest understood that to him, the commandment of “Thou shalt not kill” factually meant a proscription to kill any person regardless of the circumstances. He continued his studies after the war, although renouncing to submit a doctoral thesis. In 1923, he started working for the Society of the Care of the Blind which was then forming in Laski, as its first chaplain.

The events of the May Coup of 1926 strengthened his pacifist views which he decided to manifest by embarking upon a walking pilgrimage to Rome with no money and passport, a plan impossible to complete.

Seeking to live in perfect chastity and brotherly love, he entered the novitiate at the Capuchin Order in Nowe Miasto on the Pilica river. However, the kind of life led in the convent did not seem to meet the priest’s ideals, and he decided to leave. After that, Zieja moved to the Polesia region, to the Pinsk diocese under bishop Zygmunt Łoziński. Due to his choosing to live in evangelical poverty, he was directed to run a rather poor parish in the small town of Łohiszyn. Zieja proved excellent in recognizing the needs of his people, he was therefore commissioned by Łoziński to organize a network of charity institutions. After the bishop’s passing away, Zieja decided to follow a two-year course in Judaic Studies at the University of Warsaw. Drawn by its social work program designed to meet the needs of the suffering, he also joined the activities of the Rural Youth Association „Wici”. Upon finishing his studies, he entered cooperation with Urszula Ledóchowska, USAHJ, who planned to widen the scope of the missionary and educational activities entertained by her congregation in the Polesian area. It was her project to found a network of kindergartens, schools, and institutions providing aid to the least well-off. Zieja was to hold the pastoral office supervising these facilities.

After the outbreak of the Second Word War, Zieja joined the army and took the post of the chaplain to the Rifle Regiments of Polesia. When the regiment capitulated, he chose to stay with the injured soldiers; then by the end of the year he started working for Society for the Care of the Blind in Laski near Warsaw. He also collaborated with the Żegota Committee (The Council to Aid Jews) and was chosen the chief chaplain of the para-military Scouts Szare Szeregi (“The Grey Ranks”), and subsequently to the Home Army Headquarters as well as the Polish Peasants’ Battalions. During the Warsaw Uprising Zieja continued Christian ministry activities, known under the pseudonym „Rybak”. Once the Uprising had died down, released from the Pruszków camp, he returned to Laski.

After the war, Zieja worked at a parish in Słupsk which he again had to leave due to religious persecution of the communist regime. Sent by cardinal Stefan Wyszyński to Warsaw, he was appointed chaplain to the Visitationist Chuch and Order in Krakowskie Przedmieście street. The liturgical service which he provided became increasingly important for Warsaw’s intelligentsia seeking spiritual guidance in the times of communism. He had to leave Warsaw in 1954, again for religious reasons. In 1957, he began teaching at the Higher Theological Seminary in Drohiczyn. His wandering eventually came to an end in 1963, when he settled in Warsaw as chaplain to the Ursuline Order and focused on ministry and literary work. It was then that he wrote the memorial concerning the Fifth Commandment, among others; fascinated by the figure of the UN Secretary-General Dag Hammarskjöld, he learned Swedish in order to be able to translate Hammarskjöld’s book Markings. Despite his advanced age, in 1976 he was among the founding members of the Worker’s Defense Committee (KOR). He took charge of the Committee’s finances, but more importantly, gave ethical guidance to its members. Despite the tensions his activities in the KOR generated among the church hierarchs, he supported the view that the Committee’s founding idea, i.e. that of overt and non-violent defense of the wronged, is in accord with the law of the Gospel. In the years to come, he would also prove a supporter of the Solidarity Movement.

Throughout his life, Zieja received several important decorations, both ecclesiastical and secular. In recognition of his participation in the Polish-Bolshevik War, he was advanced to the rank of the lieutenant-colonel and decorated with the Cross of Valor; for his activities during the Warsaw Uprising he was given the Warsaw Cross of the Uprising, as well as the Commander’s Cross of the Order of Polonia Restituta. He died on 19 November 1991, with burial services led by the Archbishop of Poland, cardinal Józef Glemp; his grave is located at the cemetery in Laski. The year 19 November 1996 – 19 November 1997 was the memorial year devoted to Father Jan Zieja.

Biography written by the students of secondary schools in Warsaw Katarzyna Bąkowska, Irena Gostkiewicz, Wiktoria Mylik, Sylwia Giermakowska, Aleksandra Kurczewska, Emilia Przystawko, Michał Szyszko, Marta Karpowicz during a project conceived by the History Meeting House (Dom Spotkań z Historią). The students prepared also lists of reference works and films, and registered interviews with persons who used to know the selected figures of the Righteous. The project is co-financed by the Museum of Polish History in Warsaw within the programme "Patriotyzm Jutra" ("Patriotism of Tomorrow").

Father Giovanni Zieja is honoured in the Garden of Warsaw.