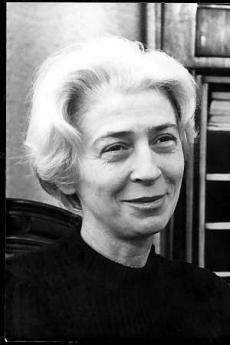 Halina Mikolajska was born in 1925 in Cracow. During the Nazi occupation she played in the underground theatre of Cracow founded by Adam Mularczyk (1). In 1947 she obtained her diploma from the Academy of Dramatic Arts of Cracow and soon she stood out for her talent. From 1950 she lived in Warsaw, where from 1953 to 1962 she taught at the Academy of Dramatic Arts, besides appearing in numerous shows in all the most important theatres of the country, becoming one of the most appreciated Polish theatre and cinema actresses.

In 1975, the reading of a book sent her by Adam Michnik (2) on theatre and cinema inthe Third Reich upset her: seeing how German play-writing had been distorted and bent to ideological purposes made her grasp the similarities between Nazism, Stalinism and Communism. Although she never took part in any party structures, she wrote: “Prizes and banquets, not only at Goebbel’s, but also at Bierut’s, Sokorski’s or Cyrankiewicz’ (…), I, too am a part of a disgusting monopoly, the monopoly of propaganda” (3).

In December 1957 she was among the signatories of the so called "Letter of the 59” sent to the Parliament by a group of intellectuals in order to protest the project to introduce into the Constitution an article on the inviolability of the alliance with the USSR and the guiding role of the communist party. Responding to the words of her producer, who told her ironically that from a great actress she would turn into a dabbler of politics, she wrote a very harsh letter, in which she affirmed she was not interested in politics, but rather in the moral features of reality, whereas in a letter to her husband, poet Marian Brandys (4), she explained the reasons of her gesture in the following way: "Faced with my 50th birthday I started an earnest reflection on the value and meaning that these years have had and also to wonder how to live my remaining years. (...) Alas, I feel a growing wave of dung, and I feel I can do something not to let it rise. Maybe, some time in the future (...) we will have to be heroes to perform such deeds, by not a little courage suffices” (5). The reaction of the authorities came very soon, her name was banned from theatres and all works in which she played were removed from the run: the name of this actress had to disappear from theatres, tv, radio and the newspapers.

In 1976 she joined the KOR (Committee of Workers’ Self-defence) (6). She went to Radom as an observer of the trials against the workers who had been the protagonists of the protests in June 1976. The Secret Service’s crackdown is particularly harsh and cruel: anonymous letters and calls, her car littered with paint, got her tires punctured, her flat’s lock was forced, an aggression was simulated. All this, and the impossibility to carry on her job, led her to a nervous breakdown that culminated in a suicide attempt. She would then describe her situation in letters and notes that would be published in the underground press.

Nonetheless, she carried on struggling. The flat in which she lived with her husband often hosted underground opposition meetings. In 1977 she became the spokesperson of KOR and she became the Secretary General of its Executive Council. In 1978, during a long trip in the West, she took part in numerous meetings with the Polish emigration and the representatives of the world of culture and she raised funds for KOR. On 22 January 1978 she was among the founders of the Flying Universities and took part in the poetry evenings organized by these Universities in private flats and in many Warsaw churches.

In October 1979 she joined the hunger strike organized by the members of KOR in the Church of the Holy Cross in favor of the Czechoslovak dissidents who had signed Charter 77 and had been jailed.

She was repeatedly halted by police, which this way prevented her from taking part in poetry recitals held in different cities. Her return on stage in November 1980, during the concert held to celebrate Solidarność’ registration, was welcomed by a very long applause. She wrote: "In the end, unwillingly, I have become a symbol and no more of theatre. (...) They applauded me not for what I played once, during my over 30 years of career, but for what I have never played: my five years of persecution by the Secret Service” (7). She joined the Committee for the Defence of Prisoners for their own Opinions, set up in December 1980 by Solidarność. She also joined the 1st National Congress of Solidarity Representatives.

On 13 December 1981 she was interned for five months. After her release, she founded her own theatre, formed only by her, ad she restarted playing in private flats and churches. She went all over the country to play in poetry recitals, reciting the verses of the forbidden poets, including Czeslaw Milosz, and religious, chiefly Marian, poems. In the Eighties she was among the signatories of declarations and protest proclaims written by the KOR members and in 1987 she joined the Civic Committee of Solidarity’ President.

In Summer 1986 she discovered she had cancer. On 4 June 1989 she went to vote on a stretcher and she died 17 years later. In 2006 she was posthumoursly awarded the Cross of the Commander of the Order of Poland’s Rebirth.

(2) Adam Michnik (17 October 1946), journalist, historian and writer. One of the most important representatives of the Polish opposition. He joined the protests of March 1968, he was a member of KOR and often jailed by the authorities, who were on power. In the Seventies he was a member of the Committee of Aid to the Workers (KOR) and the author of numerous articles in the underground press. He could not go to Danzig during the strikes in August 1980 because he was halted by the police. He would be set free after Solidarność’s birth. He became a Solidarność councilor for the Warsaw region. After the passing of the State of War was first halted, and after refusing to leave the country “willingly” he was jailed, where he stayed untried until 1984. In 1985 he was arrested again and sentenced to a 3-year term. He was released after one year and a half thanks to the amnesty law. In 1989 he joined the works of the Round Table. After the agreements of 1989 he ran Gazeta Wyborcza (Electoral Gazette), the newspaper of Solidarność, in the sight of elections. This newspaper would then become the most important Polish daily newsapaper, which he would run until 2004. From 1989 to 1991 he was a deputy at the Polish Parliament.

(6) The Workers’ Defence Committee (KOR) was set up on 23 September 1976, after the harsh crackdown of the regime against the workers in the cities of Ursus and Radom, who had gone on strike on the previous 25 June. KOR set itself as a purpose to defend the victims of the repression, assist their families and make of public domain the cases of violations of human rights through some underground publications. The KOR was joined by people of different political and ideal orientation, from the far right to the socialist left, Catholics, Protestants, Jews and secularists. Almost all names of KOR members were disclosed and made of public domain. Soon it became on of the most important organizations of the opposition, known also abroad, and this is why it managed to break the monopoly of the information held by the Communist state, despite the crackdowns and the continuous arrests to which its members were submitted.