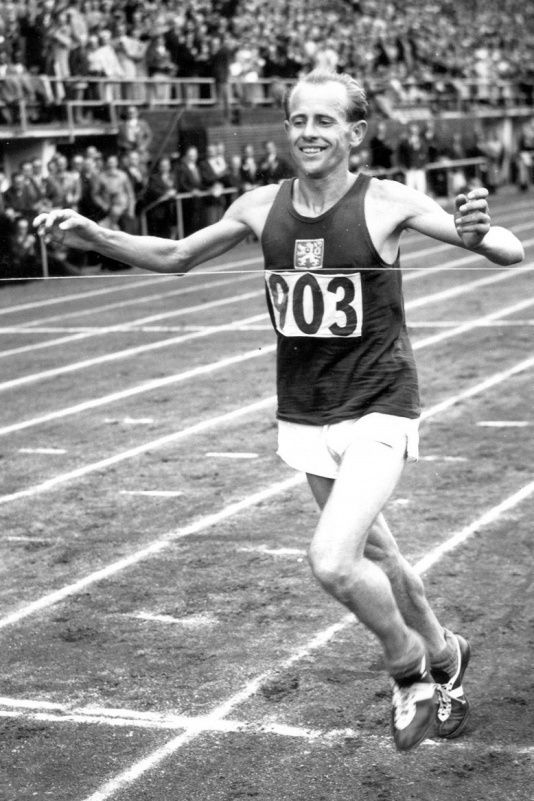 Emil Zatopek was born on September 19, 1922 in Koprivinice, Czechoslovakia, in the region called Moravia. Grew up in a large and humble family, sustained by the father shoemaker. Emil works as a labor in a shoe factory when, during a race organized by his employer, a sport enthusiast, he places second without any experience or training. He then becomes aware of his predisposition and special talent for running and begins to cultivate it.

Denominated the “human locomotive”, Zatopeck is the man simbol of the Olympic Games in Helsinki in 1952, where he accomplishes a legendary challenge winning 3 gold medals in a week: 5.000 metres, 10.000 metres and maraton. Pioneer of the interval-training (which consist of a series repetition of 400 metres, interrupted by 200 metres of recovery), Zatopek becomes famous for is running style, with the head tilted backwards, elbows to the body, and a pain grimace always on his face.

At the Olympic Games in Mexico City, meanwhile the Russian tanks are still in the streets of Prague, Zatopek declares: “We have lost, but the way in which our attempt has been cut down belongs to the savageness. However, I am not afraid: I am Zatopek, they won’t dare to touch me…”. On the way back to his homeland, in fact, Emil and his wife Dana Ingrova, she as well a gold medal in Helsinki in javelin throw, don’t suffer any immediate repercussions. The Soviet normalisation, anyway, will submerge them in more than twenty years of oblivion.

Emil is expelled from the Czech Communist Party and from the army. Sent to the uranium mines in Jachymov, at the German border, he lives for six years in a warehouse before coming back to the capital as a garbage man.

Emil Zatopek has definitively retired from the sports’ world in 1982, to live in Prague together with his wife Dana, who has assisted him until the day of his death.

Emil Zatopek is honoured in the Garden of Calvisano.