primate of Hungary and leading instigator of the revolution 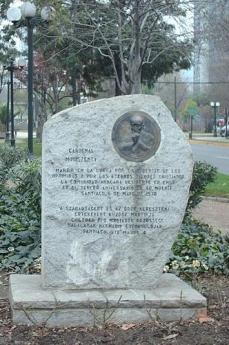 Jozsef Mindszenty was born Jozsef Pehm, on 29 March 1892 in Csehimindzsent, in the Vas region on the border between Austria and Slovenia, then Austria-Hungary. His father was a magistrate. He was ordained on 12 June 1915. In 1917 he published his first book, entitled Motherhood. On 9 February 1919 he was arrested by the socialist government of Mihály Karoly and held in prison until the end of the communist government of Bela Kun.
In 1941 he changed his German-sounding name to Mindszenty, after his native village. At the same time he joined the Independent Smallholders’ Party, which opposed the fascist Arrow Cross Party. On 25 March 1944 he was consecrated bishop of the prestigious diocese of Veszprem. On 26 November he was arrested for having opposed the Arrow Cross government and charged with treason.
Mindszenty was released from prison in April 1945. On 15 September he was appointed Primate of Hungary and archbishop of Esztergom. Pope Pius XII made him a cardinal on 18 February 1946. In 1948 the communist government banned all religious orders and on 26 December Mindszenty was arrested and charged with treason, conspiracy and failing to obey the laws of the land. Shortly before his arrest he had written a note denying any involvement in a conspiracy, and stating that any confession he might make to the contrary would have been extorted from him with violence. Throughout his imprisonment he was repeatedly tortured to force him to confess to his alleged crimes.
His show-trial began on 3 February 1949. On 8 February Mindszenty was sentenced to life for high treason. The authorities published the so-called Yellow book, a list of his confessions under torture. On 12 February 1949 pope Pius XII excommunicated everyone who had been involved in his trial. In an apostolic letter Acerrimo Moerore the pope publicly condemned the cardinal’s imprisonment and torture.
On 30 October 1956, during the Hungarian Revolution, the Primate was released and returned to the capital. On 2 November he spoke to the insurgents and the next day broadcast a radio message in support of the uprising. Later, Kadar’s government was to use these speeches to demonstrate his “clerical, imperialist and counter-revolutionary” influence on the events of 1956. When the Soviet army invaded Hungary on 4 November, Mindszenty took refuge in the United States Embassy in Budapest. He was to stay there for 15 years. After numerous attempts to solve the thorny issue of the cardinal’s “house arrest”, on the part of both the Vatican and the USA (to whom his presence in the Embassy created considerable inconvenience), a compromise arrangement for him was finally reached in 1971: pope Paul VI agreed to declare Mindszenty a “victim of history” (and not of Communism) and to withdraw his excommunication of the Primate’s persecutors and political opponents.
Thus, on 28 September 1971, the Hungarian authorities finally gave Mindszenty permission to leave the country. The cardinal moved to Vienna, but refused to retire and thus formally remained the Primate of Hungary until 1973, by which time he was 82 years old. Out of respect for the aging cardinal, his seat was left vacant until his death, on 6 May 1975. At the beginning of 1976 pope Paul VI appointed the new Primate of Hungary, bishop Laszlo Lekai, who adopted a submissive attitude to the Kadar government.
Cardinal Mindszenty was, and still is, a controversial figure: on the one hand, nobody doubts his courage in opposing both Nazi and Communist totalitarianism; on the other, many people were puzzled by his aristocratic attitudes and his intransigent closure to all dialogue with the new Communist state. His stance deprived the Hungarian Church of a clear and authoritative leader, leaving it at the mercy of the powers that be, who infiltrated every level of the church structure, both via the Office for Religious Affairs, which controlled the nominations of bishops and parish priests, and via the organization of the pro-government clergy of the “Priests for Peace”.