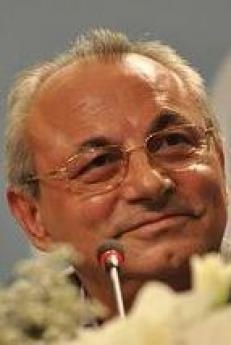 Ahmed Demir Dogan was born in a country village. In 1981 he graduated in philosophy from the University of Sofia and in 1985 started work at the Institute of Philosophy.

In the summer of 1985, in protest against the campaign that was trying to “Bulgarize” the Turkish minority, forcing them to change their own surnames to uniform them with the Nation, he set up the “National Turkish Liberation Movement”. The organization was openly anti-Communist and, thanks to a well-structured underground organization, it soon spread throughout the country. The Movement’s programme was to fight the totalitarian regime, inform the international community about the repressive character of the Bulgarization process and organize protest actions. Initially some 200 people joined, including doctors, teachers, blue-collar workers and farmers. The Movement’s motto was “fight without arms”. Dogan was the author of the programme, which condemned terrorism and the separatism of the Turkish community as violent actions that undermined human rights.

On 12 June 1986 Dogan was arrested along with 18 of his comrades and charged with setting up an organization to weaken state power. Sentenced to 13 years harsh detention, he managed to smuggle out a protest declaration to Paris and, from prison, in May 1989, to direct a wave of demonstrations organized by Bulgarian Turks: on 25 May he sent the Prime Minister a letter in which, among other things, he demanded “an amnesty for all political prisoners, the freedom to use and teach the languages of Bulgaria’s ethnic minorities, full freedom of religious confession and the possibility of emigrating to Turkey”. By way of response he was transferred to death row in Sofia’s central jail, where he was subjected to enormous psychological pressure, comparable to torture.

He was released on 22 December 1989 under the amnesty. At the end of that year, almost all the former political prisoners sentenced for opposing forced Bulgarization united to give rise to a legal organization in defence of the rights and freedoms of Bulgarian Turks. The organization was inspired by the “Universal Declaration of Human Rights”. 4 January 1990 saw the birth of the “Rights and Freedom Movement”, of which Dogan was unanimously elected president.

Since 1990 he has been a member of parliament.