hope in the skies of Prague 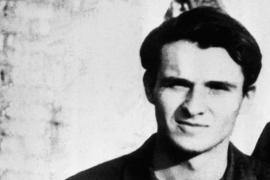 On 16 January 1969 Jan Palach, a 21-year-old university student, doused his clothes in inflammable liquid and set fire to himself in St. Wenceslas Square in Prague.

"I do not want to commit suicide, I set fire to myself like the Buddhists do in Vietnam, to protest against what is happening here, against the lack of freedom of speech, of the press and of everything else".

These are the words that Jan Palach repeated to the staff of the hospital to which he was taken. He died three days later, on 19 January.

Palach was born on 11 August 1948 in Vsetaty, 40 Km. from Prague. His father, Joseph, an anti-communist and member of the Socialist Party, conveyed his passion for history and literature to his son, along with a sense of moral rectitude. Jan was baptized into the Evangelical church attended by his mother.

After high school he enrolled in the King Charles University in Prague, first in the Faculty of Economics and later in that of Philosophy. Like most Czechoslovaks – and countless other people throughout the Soviet bloc – he supported the reforms of the so-called “Prague Spring” of 1968, sharing their hopes and enthusiasm.
In those months he attended the meetings, assemblies and other chances for a taste of freedom that sprang up in civil society. But the illusion of reform was brutally interrupted: on 21 August 1968 when Warsaw pact forces invaded Czechoslovakia.

The press was gagged and the right to hold public gatherings and to strike was severely restricted. All anti-Soviet protests were fiercely repressed. The strike planned by the CASP (Prague students’ committee for action) for 18 November also failed when the majority of the population was gripped by a sense of discouragement and fear.

Dismayed by this dramatic situation, Jan Palach began to plan a high-impact act of defiance. At Christmas he met his primary school teacher and talked to her about his disappointment in "the apathy that has overcome Czechoslovak society and the need for a reawakening".

On 6 January 1969 he wrote a letter to the student leader Lubomir Holecek, in which he launched the idea of a student blitz on the premises of Czechoslovak Radio in Prague and a subsequent appeal to the general public for a strike against censorship. Ten days later, on 16 January, he wrote 4 farewell letters, signed "the first torch ", addressed to the Writers’ Union, to Holecek and to his friend Ladislav Zizka. The fourth was later found in his bag on the steps of the National Museum in St. Wenceslas Square, opposite the Federal Palace that symbolized the power of the State.

"Since our peoples are on the verge of despair and resignation, we have decided to express our protest and to arouse people’s conscience. Our group is made up of volunteers, ready to immolate themselves for our cause. Since I have had the honour of drawing number 1, I am entitled to write the first letter and to be the first human torch. We demand the abolition of censorship and a ban on Zpravy (the news bulletin published by the occupying Soviet forces). If our demands are not met within five days, by 21 January 1969, and if our people fail to give our demands sufficient support, with a general and unlimited strike, a new torch will be lit."

The tragic epilogue came that afternoon. Before he died, in rare moments of lucidity, he asked for the newspapers to be read to him, to know whether the government had accepted any of his demands.

His body was laid out in the Faculty of Philosophy where a constant stream of men and women came to pay their last respects: not only local Prague residents but people from all over the country. On 25 January, the day of his funeral, a vast and silent crowd of mourners came to say their last farewell to this young man with whom they had shared a dream of freedom.

full text of the hitherto unpublished letter sent to Holecek

Hitherto unpublished letter from Jan Palach (iDnes.cz, 9.1.09) Before setting himself alight on 16 January 1969, Palach had been planning a student blitz on the Prague premises of Czechoslovak Radio in an attempt to encourage the inhabitants of the city to strike in favour of the abolition of censorship. His letter to the student leader Lubomir Holecek is dated 6 January 1969. It was discovered by the historian P. Blazek who has published it in his new book on Palach, which came out in January 2009.

Jan wrote: "I propose a gesture that at first sight may seem crazy (and perhaps it is!): instead of other forms of protest, it seems to me that it would be more useful and effective to occupy the premises of the radio and from there to broadcast an appeal for a strike to abolish censorship and in favour of Smrkovský [president of the parliament and a pro-Dubčekian]. I believe, in fact, that the time is ripe politically, and a second opportunity might not arise*. The action should be carried out by a small group and only subsequently should a large crowd of students surround the Radio building".

Holecek, however, failed to reply and at that point Jan was prompted to make an extreme gesture "one that would have a far greater impact than the occupation of a building ", concluded Blazek, interviewed by idnes.cz. The historian claims that this letter indirectly demonstrates that the hypothesis of a presumed group of volunteers ready to immolate themselves after Palach is unfounded (despite our having had to read it in the usual superficial reconstructions of a certain "committed" Italian press).

* He is referring to the institutional changes in which pro-Dubček politicians were being ousted in favour of pro-Soviet opportunists.