underground priest in Czechoslovakia, targeted for his faith 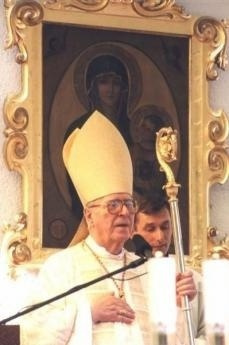 Jan Korec was born in Bosany, in the diocese of Nitra on 22 January 1924. On 15 September 1939 he joined the Society of Jesus. From 1944 to 1950 he studied theology and philosophy. In 1950, after the abolition of religious orders, he was interned in a concentration camp. Released due to ill health, he found a job as a blue-collar worker in a chemical factory.
On 1 October 1950 he was secretly ordained a priest, and on 24 August 1951, at the age of just 27, he was secretly consecrated a bishop. In civilian life he was a labourer, a librarian and a night watchman. In 1955 the secret police discovered that he was a member of the underground Church and started to keep him under surveillance. In 1960 he was sentenced to 12 years in prison, the sentence was made public, revealing that he was a bishop. In prison he was kept in solitary confinement for a long time: “This was surely the most terrible of punishments. However, necessity makes man ingenious so I found a very simple way to break my isolation. I imagined that I was doing spiritual exercises. I set myself an intense and a very detailed daily programme. I would start early with a good hour’s meditation, exactly like they used to do in the convent. Then, Holy Mass. (…). Then (…) my studies began: I went over theological and philosophical texts by heart, discussing them out loud as if I were at university, standing in front of my lecturers (…). Evening came without my having managed to complete the whole programme”. From his prison in Valdice (northern Bohemia) Korec asked several times to be rehabilitated, not pardoned. He wrote to the Minister of Justice: “I have not confessed, nor shall I ever confess to having consciously committed the offences against the law or the Constitution of which I have been accused. I have already expressed my opinion about the way this trial has been conducted and I shall not change it (…). I have begun my 12-year sentence convinced that I am the victim of an open reprisal undergone in conditions of absolute physical and legal impotence. Only criminals are punished with 12 years’ imprisonment... with my trial a disservice has been done to Slovak justice (…). Then I consider the charge of remaining loyal to the Pope an honour. My loyalty requires neither the approval nor the consent of anyone. Prison has in no way diminished this loyalty”.
Korec was freed on 20 February 1968 and subsequently rehabilitated. In 1974 his rehabilitation was declared void and he had to serve the remaining four years of his sentence. Released due to ill health, he lost his job as a street cleaner and for some time he remained unemployed; he later got a job unloading barrels in a chemical factory, where he remained until 1984. Between 1975 and 1979 he was stopped and interrogated 15 times. In the Eighties he was in close contact with representatives of the Slovak protestant Church and played a vital role liasing between the various spheres of Slovak dissent. In April 1980 he sent the President of the Federal Assembly a letter protesting against the methods used by the police, in 1983 he signed a petition condemning the repeated repression of Franciscan monks, in 1987 the Declaration against the deportation of Jews from Slovakia. From 6 February 1990 to 28 June 2005 he was archbishop of Nitra. Pope John Paul II raised him to the rank of cardinal on 28 June 1991.