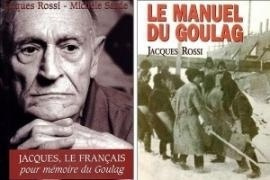 Born in France, Rossi studied Fine Arts and Oriental Civilizations in Berlin, Cambridge and at the Sorbonne; in Poland with his mother, at the age of sixteen he was already a member of the underground Polish Communist Party; he speaks some ten languages and was hired by the Komintern, for which he conducted several missions. From Spain, where he worked as a liaison agent during the civil war, he was recalled to Moscow: it was 1937, the year of Stalin’s notorious great purge and "Jacques the Frenchman" was sentenced to ten years in the GUlag for "spying on behalf of France and Poland". In 1948, instead of being released, he saw his sentence extended for a further 10 years. In a CV in English, Rossi himself was to define those twenty years ironically as: "Survival studies, the Gulag Archipelago: 1937-1957". Despite the 20th Communist Party Congress of 1956, he had to spend 4 more years relegated to Samarkand, in central Asia. With great difficulty and threatening spectacular protests he managed to obtain a visa for communist Poland and to return definitively to France only in 1985. His forced "survival studies" gave him the chance to compile an encyclopaedic dictionary of over 2000 files (and thousands of items and definitions): known as the "Gulag Handbook", it was published in Russian, in London, in 1987, but ignored by western publishers who had no interest in first-hand testimony. A further decade was to pass before it was published in France. At the end of his life he recorded series of interviews which were subsequently published as Jacques, le Français : pour mémoire du Goulag, and Qu'elle était belle cette utopie: chroniques du Goulag, illustrées par l'auteur.