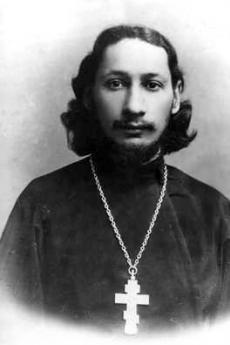 He was born in Evlach, in Azerbaijan, in 1882. He then lived in Georgia. In 1904 he graduated in maths and physics at the Moscow University and attended the Academy of Theology. He published many papers and took an active part in the cultural life of the pre-revolutionary Moscow. He started teaching History of Philosophy and he was appreciated for his original way of teaching and for the deepness of his philosophical and scientific reflections. He was consecrated Orthodox Presbyterian and was director, form 1911 to 1917, of the important review "The Theological Messenger", of which he renewed the contents and the structure.
In 1914 he published "The Pillar and Ground of the Truth" that is considered today the "orthodox theological summa" and a masterpiece of the contemporary philosophical and theological thought.
After the 1917 Revolution, he decided not to abandon the country, but to carry out a strong interior opposition with the persecuted people. In 1928 he was imprisoned for the first time with the accusation of "obscurantism" and was sent into forced residence. The sentence is then repealed. Florenskij refused the exile to Paris in order to share the destiny of his fellows.
In 1933 he was again accused, arrested and condemned to a ten-years reclusion in a lager. First he was taken to Skovorodino, in the Western Siberia, and from September 1934 he is imprisoned on the Solovki Islands. On the 8th of December 1937 he is shot down with other 500 people in the woods around Leningrad.
"Nothing is completely lost, nothing fades away", he wrote in a letter "but it's preserved somewhere and sometime, even if we stop perceiving it".
Florenskij's literary production is enormous and ranges in every field, from the theological one, to the scientific, literary, linguistic, artistic and musical. For example: "Spatial and Temporal Analysis of Artistic and Figurative Works" ; "Iconostasis"; "The meaning of Idealism"; "Do not Forget me"; "To my children. Memories of the Past Days"; "The magic Value of the Word".