he wrote A World Apart 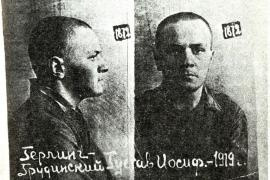 Gustav Herling in Naples in 1944 with Lidia Croce

Gustav Herling was a Polish writer and journalist. In 1939, after Poland was partitioned between Germany and the USSR, Herling was arrested by the Russians while trying to leave the country for France to fight the Germans. Deported to a labour camp on the Baltic, after Germany’s attack on the USSR he was released and joined the Polish Volunteer Corp under general Anders. He fought alongside the British, between 1942 and 1944, in North Africa and in Italy, at Montecassino. In 1955 he settled in Naples, dividing his time between this city and Paris, where he worked for the Polish magazine "Kultura", which he had helped found in 1947. He also worked in Italy, contributing to Ignazio Silone and Nicola Chiaromonte’s magazine "Tempo presente", as well as to various daily papers and periodicals. His book on the Gulag experience, A World Apart, was published in London in an English translation in 1951, with a foreword by Bertrand Russell who admired both its documentary rigour and its literary merits. In France, on the other hand, despite the enthusiastic appreciation of Albert Camus, he was unable to find a publisher until 1985, and in Italy not until 1994, except for a previous practically clandestine edition, that went unnoticed. As Herling himself wrote in a preface to the Russian edition (1986) of his book, the cultural establishment mainly followed Sartre’s advice: "even if it is true, don’t speak about it". Now that the book has been re-discovered, his other writings are appreciated too, including Diario scritto di notte (Italian translation of selected passages published in 1992).