he defended peace and human dignity in the Gulag 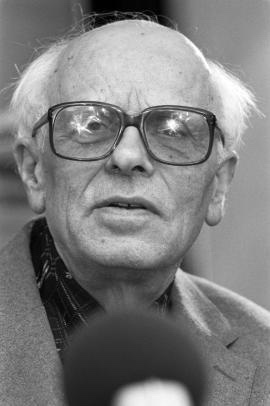 Andrei Sacharov was a physician, a member of the Academy of Sciences of USSR from 1953. He did important researches in astrophysics and was one of the creators of the thermonuclear bomb. For this reason, he was awarded three times Hero of the Socialist Work. In his work Sacharov was already convinced of operating for an ideal of peace and progress: he considered the nuclear balance a deterrent from a global military conflict between the two blocs. He will underline this conviction in the samizdat essay of the 1968 "Progress, Coexistence and Intellectual Freedom", in which he wishes a gradual approaching between USSR and USA and a strong refusal in USSR of neo-stalinist temptations.
He was a supporter of the Spring of Prague and one of the first who spoke about the question of the political prisoners.
In that same year, 1968, Sacharov got nearer and nearer the dissident movement and when, in 1971, he got married to Elena Bonner, he was with her in the centre of every battle for the respect of human rights and legality.
In 1975 he was awarded with the Nobel prize for Peace. In the beginning of 1980 he denounced the Soviet intervention in Afghanistan and was relegated in Gorkij, where he lived, in almost complete isolation, for 6 years. He came back to Moscow in 1986 and was elected in 1989 at the Congress of the People Deputies. He became one of the chiefs of the democratic opposition, which asks quick and substantial reforms. When he died, in on the 14th December 1989, he was fighting for the abolition of the 6th article of the Soviet Constitution, the one on the role of the Communist Party, and he was working hard on the project of a new Constitution. In 1990 his "Memories" were published.

Andrei Sakharov is honoured in the Gardens of Kfarnabrakh e Milan - Monte Stella.