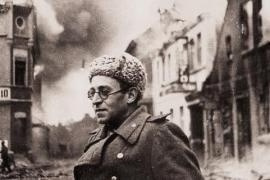 Of Jewish origin, Grossman studied physics and mathematics in Moscow and worked as a chemical engineer; he published his first book in 1934 – a novel in the "productivistic" prose style extolling the successes of industrialization – along with some less panegyric short stories, in particular about the civil war, which earned him the praise and encouragement of Gorky.
During World War II he followed the Red Army all the way to Berlin as a correspondent for the military newspaper "Krasnaja Zvezda". His war reports and essays made him, along with I. Erenburg, the most popular journalist and correspondent of those years. But by 1946 one of his plays had been suppressed for ideological reasons. His novel For a Just Cause about Stalingrad (published in 1952) is an epic tale in the mold of Stalinist socialist realism, which he hoped would rectify his situation but despite initial acclaim, it too was later suppressed (Grossman was to re-elaborate it later).
Meanwhile, the general situation had changed. These were the years of the persecution and physical liquidation of the Jewish Anti-Fascist Committee and the alleged "assassins in white coats " plot, which died down after Stalin’s death. The censors also clamped down on the impressive Black Book – an idea of Albert Einstein – in which Grossman and Erenburg denounced the genocide of Jews in the Soviet territories occupied by the Nazis. The book was not to be published in its entirety until fifty years later.
As for Grossman, in Life and Fate (1950-60) and the unfinished Forever Flowing (1953-61) - books "confiscated" by the KGB, circulated in the samizdat and published abroad – with intellectual rigor and literary talent, he pondered the ethical, philosophical and historical issues of the time: Man pitted against an omnipotent system in the ferocious century of totalitarianism.

Vasily Grossman is honoured in the Garden of Milan - Monte Stella.