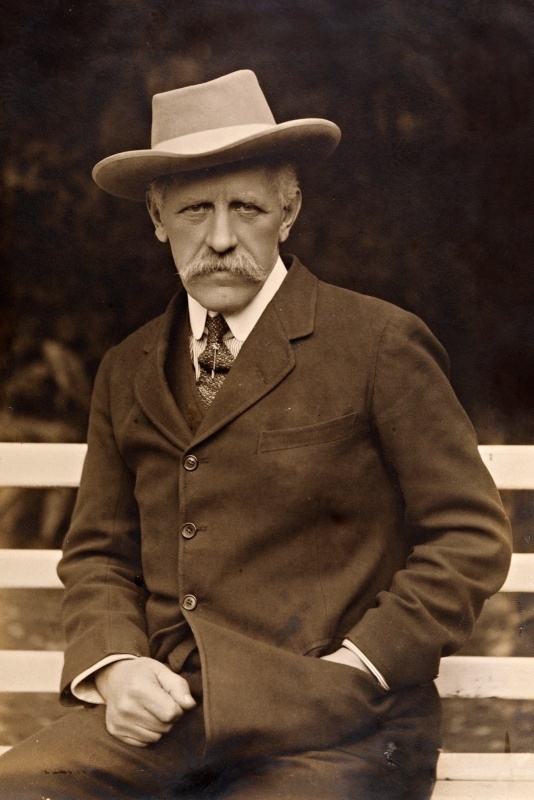 Fridtjof Nansen was born in Norway in 1861 in Store Froen, close to the city of Christiania, now Oslo, into a wealthy family involved in humanitarian work. His father Baldur fostered his son’s strength of mind, self-discipline and moral integrity as well as a passion for freedom. Fridtjof was an explorer, a man of science and a great politician, a role that he saw as a service to humanity. In 1922 he was awarded the Nobel Peace Prize for his work as the League of Nations High Commissioner for Refugees.

Right from a tender age Fridtjof loved to be close to Nature. He studied at the "Aars and Foss Institute" in Cristiania, 3 kilometres from home, and enjoyed his walk there every morning. As an adolescent he practised various sports, winning skating and skiing competitions. An excellent student, he was interested in physics, chemistry, drawing and mathematics. Although his life was full of dramatic events, crises never overwhelmed him, thanks to his strong character and to the richness of his inner life. Physically and intellectually gifted, sustained by solid principles, an indomitable spirit of adventure and a thirst for knowledge, he devoted part of his life to daring expeditions and to studying the Arctic. These brought him fame as well as opportunities to reflect on himself, mankind and man’s relationship with Nature. This prepared him for what was to become the key commitment of his mature years up until his death: solidarity with the victims of all catastrophes: wars, persecutions, famines. A humanitarian commitment – that affected the political decisions of nations and which never wavered, however hard the obstacles thrown in his way – : to convince others that it was effectively possible to create a different world. Between 1882 and 1896 Nansen took part in the ambitious nature expeditions and explorations that made him famous, soon becoming Norway’s best-known figure. He later returned to his university lecturing and research work, but life had other challenges in store for him. When a crisis blew up in 1905 in relations between Norway and Sweden (federates since 1814) Nansen travelled to London as Norway’s envoy to convince the British of Norway’s need for independence. The daring explorer became an ardent patriot and pacifist, resisting all temptations to go to war.

Nansen thus became a statesman, a defender of peoples’ freedom and rights. A treaty between the parties guaranteed Norway its independence, without resorting to violence of any kind.

During the First World War, millions of men died, both in the trenches and as prisoners of war. At the Versailles peace treaty discussions, the winners appeared to have forgotten the latter. More than anyone else, it was the prisoners of the lagers in Russia, Siberia and Turkestan that suffered most. The internment of civilians was common practice. Red Cross committees were formed in various states. The Soviet revolution increased the chaos: prisoners of war remained prisoners until they were declared “free”, a decision that aggravated the situation since there was no longer anyone to deal with them.

The international Red Cross asked for the intervention of the League of Nations, created on 10 January 1920 when the treaty of Versailles came into force, at the proposal of the American President Wilson. The latter turned to Nansen, who had become president of the Norwegian Association for the League of Nations: “I’m convinced that if I let myself get involved in this, I would never be able to get out it. And I have a lot of scientific work in prograss, which I would have to abandon!”

Nansen’s premonition came true. From that day on his international activities became the fulcrum of his life. The League of Nations entrusted him with organizing the repatriation of Russian concentration camp prisoners, without any distinction between conquerors and conquered. Nansen never imagined that the job of High Commissioner of the League of Nations would absorb him to the very end of his days and that he would have to sacrifice his scientific vocation for it. He organized a worldwide refugee and prisoner repatriation network, visiting the camps in person and placing the right people in the right places. His love of Nature had given way to his love of men: “If there is one thing I really know something about, it’s people”, he once confided to a friend. He came up against the greatest difficulties with Soviet Russia, which refused to recognize the League. He set up a central body in Berlin with representatives of governments, the International Red Cross and humanitarian associations, known as the “Nansen Aid program". It had nothing to do with the League, which did not enjoy the universal approval of all governments. Between 1920 and 1921, Nansen Aid manage to repatriate 450,000 prisoners of war, at a cost of £410,000 and with the acknowledgement of the League of Nations.

As well as prisoners, there were millions of refugees from the world war, the war in the Balkans, Greek/Turkish wars, the Russian counter-revolution, civil wars, the Russian-Polish war, the Hungarian districts of Russia and Armenia. Every time fronts advanced or retreated, civilians were displaced and, as frontiers changed, these became refugees and prey to epidemics; when they tried to return home, they found nothing but ruins and devastation. The most serious problems affected the Russian refugees fleeing from the Bolsheviks and it cost huge sums just to keep these people alive.

Nansen organized a committee to raise funds from American, European, Russian and Jewish organizations. But the refugees had no documents and Nansen had the brilliant idea of creating a passport for the stateless, the “Nansen passport”, which was recognized by 52 governments and enabled millions of refugees to find jobs, housing and protection. These passports were also issued to Armenians.

Following the law passed on 15 April 1927 – which sanctioned the confiscation of assets formerly belonging to “absentees” – Turkey had refused political exile status to Armenians that had taken refuge in Europe after the 1915 genocide. A law passed in May 1927 completed their “de-nationalization“. The Nansen passport given to both the Russians and the Armenians meant a return to life for millions of refugees, whom Nansen managed to place in 45 different countries.

In Greece, Nansen had organized the largest transfer of people ever attempted, taking 500,000 prisoners home, rescuing 2 million Russian, Greek and Armenian refugees and feeding millions of people. After his return to Norway, on 10 December 1922, in the presence of the king in the hall of the Nobel Institute in Oslo, he was awarded the Nobel Peace Prize with these words: “Fridtjof Nansen ". has succeeded, in complete political independence, in turning brotherly love into a driving and animating force in the world”.

Nansen devolved his prize to model farms in Russia and to the refugees of Asia Minor. He was never able to forget the scenes of horror that he had witnessed and they induced him to appeal to Europe’s sense of responsibility:

I will continue to shout about what I have seen to the peoples of Europe, so that they wake up and understand what unprecedented things are happening under their very eyes. The peoples of Europe have to know the truth: and then they will no longer be able to stand by and do nothing. […] If we continue to adopt this passive stance, we will be remembered throughout history, by our children and by our children’s children, as a generation that the gods decided to turn blind and mad, whose hearts, after five years of war, have been turned to stone
(quoted from J. Sorenson, page 251)

His appeal provoked a response such as the world had never seen: contributions flooded in from the Nordic countries, the British government and organizations, Holland, Italy, the Pope, associations and individuals. Nansen set up “Nansen packs”, transported free of charge, “Nansen Experimental Stations”, powers granted to the community, “Nansen pharmacies” against epidemics. He successfully rescued around 15 million Russians, becoming the only non-Russian the Russians could trust.

Nansen’s last undertaking was to rescue the few survivors of the Armenian people. In the preface to his book, A people betrayed, Nansen wrote: “I hope that the facts revealed in these pages will have the power to shake Europe’s conscience. The attitude of European countries, their lack of concern about the Armenian people, cause no less indignation than the bloody massacres committed by the Turks”( cit. J. Sorenson, page 262). Nansen’s book is an indictment against the major powers and against the League of Nations.

In 1928 Nansen still believed he could do something, but in 1929 he had to acknowledge that it was impossible to continue his efforts on behalf of the Armenians and asked to be exonerated from the task. He request was granted.

Disappointed by the passive attitude of the great powers, Nansen used harsh words against the League of Nations. In the chapter entitled “Farewell Yerevan!” he wrote:

So many struggles, misery and suffering, and always insufficient results! They say that suffering ennobles. But is there a people anywhere on earth that has suffered more than this one, without however perishing completely? And what for? In the end to be betrayed by those that had made sacred and solemn promises in the lofty name of justice? Statesmen, at least avoid solemn words and do not take away people’s last residues of faith in something that in the history of peoples is sacred, despite everything!
( quoted from J. Sorenson, page 271)

And yet Nansen’s struggle on behalf of the Armenians was not in vain. In 1928 he had successfully repatriated 70,000 Armenian refugees and had signed an agreement for the repatriation of another 12,000. His efforts to help refugees also extended as far as Cilicia (Little Armenia).

Nansen was continuing his efforts with new plans, for farming colonies for 65,000 families, when he died suddenly, in 1930. Today his Oslo home is the headquarters of the Nansen foundation which continues the humanitarian and scientific work that he started. At the League of Nations, in the secretary’s library, there is a single bronze bust, that of Fridtjof Nansen. In 1931, on the first anniversary of his death, the League of Nations set up a “living monument”, the “Nansen fund for peace”, underwritten by Grandi, Briand, Lord Cecil, Henderson, Curtius, Masaryk, Venizelos and Mowinckel, which continues his work to the present day.

Soil from his grave was laid in the Dzidzernagapert Wall of Remembrance in Yerevan on 23 April 2003, transported from Oslo by Pietro Kuciukian and by the ambassador of the Armenian Republic in Italy Gaghik Baghdassarian.