The EU day of the Righteous and Holocaust remembrance 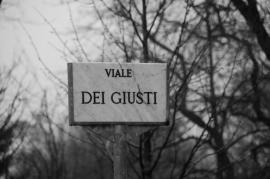 Is there any clash between March 6, the European day of the Righteous, and January 27, Holocaust remembrance day?
This question was asked by many people after the great success that the new recurrence, set up by the European Parliament on May 10 2012, had in over 20 Italian towns and in many European capitals, from Brussels to Warsaw, from Prague to Sarajevo and Saint Petersburg.
Someone in fact fears that the European day for the Righteous can somehow “cannibalize” Holocaust remembrance day and enfeeble this memory in the face of all sort of revisionists.
Nothing of this kind will ever happen. The two different days have different functions and complete each-other. Holocaust remembrance is also quite emphasized by the remembrance of the Righteous, who have taken up a personal responsibility for all crimes against humanity.
As pointed out by Yehuda Bauer, who has been in charge of Yad Vashem’s Centre for Holocaust studies for many years, who has dedicated a book to Rethinking the Holocaust, the stake of this game is essentially the possibility o fan active commitment to prevent genocide. What happened yesterday can resurface in new forms and the international communities after 1945 has too often stood silent by new cases of mass murder. The memory of the Righteous is aimed at warning individuals and States against the repetition of the world’s impotence in the face of Auschwitz, to carry out the cultural and political measures that can prevent that what happened to the Armenians reoccurs anywhere else, from Cambodia to Rwanda.


By proposing the European Parliament the commemoration of 6 March, Gariwo drew inspiration from the great innovative work by late lamented Moshe Bejski and the Department of the Righteous in Yad Vashem that he ran for thirty years, to underline right on the day of his passing away the educational value of the memory of Good. The popularization of the tales of rescue and sacrifice for the defence of the others’ lives does in fact warn the European citizens about the value of personal responsibility: every human being can always make a choice and do what he can to help stem evil.
In this respect, Yehuda Bauer questioned the definition of “uniqueness” of the Holocaust, and he prefers using – not without a certain sense of unease, however – the term “unprecedentedness”.
There are two main reasons for this. If you define a phenomenon as unique you can paradoxically think it will never occur again, while the “genocide of Jews was planned by humans for human reasons, and everything made by humans can be repeated – certainly not the same, but probably a similar way”.
Secondly, the term unique can lead to think that the genocide was carried out for a “decree of some God, Satan or some transcendent force and in this case Hitler and the villains would be only pawns” and not the people guilty for their deeds that they were.
Instead “the horror of the Holocaust does not reside in the fact that it deviated from human rules; but rather in the fact that it did not at all do that”.
Yehuda Bauer’s conclusion s that there is always a free will and every man can opt between good and evil. The Righteous “prove that it was possible to rescue some lives. The deeds of these people prove the guilt of the others, but also the fact that there is still room for hope”.


The second challenge of Gariwo for the European Day of the Righteous is tha inspiration drawn from the work of Jewish Pole Raphael Lemkin, who in December 1948 was the great personality behind the United Nations’ resolution on the prevention and punishment of genocide. As a matter of facts this is an international convention with many limits: it fails to distinguish a total genocide like the Holocaust – whereby the Jews had to be annihilated all over the world – and local and partial genocide cases; it exclude all kind of analysis of the phenomenon of “politicide” in which totalitarian systems exterminated in Russia and Cambodia millions people, guilty of belonging to certain social classes. Practically, since the end of the war this treaty has never been applied due to the crossed vetoes of the great powers, who stopped every possible international intervention that could damage their economic interests.
It has been a true failure. Nonetheless – Bauer points out – it is still the only international instrument to punish not only the perpetrators of a genocide, but also those who verbally abet it, like the Iranian President Mahmoud Ahmadinejad when he asks for the complete distruction of Israel.
Why then call for this instrument precisely on the European Day of the Righteous?
The reason is very simple. Both education to personal responsibility after the moral examples which can really lead to the moral ripening of our societies and the creation of international institutions eventually taking on responsibility in the face of every form of extermination play a part in genocide prevention.
Yehuda Bauer suggests that every country – like the US with the Obama administration – creates an entity formed by intellectuals and politicians that not only enliven the memory of the past genocide cases, but also steadily monitors the state of the world to denounce the ongoing massacres and evaluate feasible and effective measures.


A lasting memory of the Holocaust will be able to take root only when Lemkin’s intuition is truly implemented at the international level. Otherwise it runs the risk of vanishing, falling back on itself instead of aiming at the improvement of the world we live in.
Yehuda Bauer invites us to grasp the continuity between Holocaust remembrance and the memory of the Righteous, and he states we should add other three Commandments to the ten of the Bible. Among others he would suggest including this commandment: “Thou, thy sons and the sons of thy sons will never, never, be the passive bystanders to a mass murder, a genocide, or a horror like the Holocaust”.
We will relentlessly work with this spirit, so that 6 March can become the European day to raise awareness about genocide prevention.