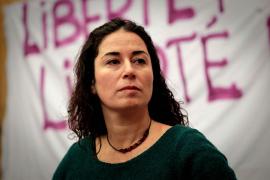 Pinar Selek was born in Istanbul in 1971. After obtaining her diploma from the French grammar school Notre Dame de Sion, she graduated cum laude in Sociology at University Mimar Sinan. In 1996, she published with  Belge Publishing, Ragip Zarakoglu's publishing house, the book Ya Basta-Artık Yeter, devoted to the indigenous movements of Mexico. Her Master thesis bears the title Maskeler, Süvariler, Gacılar-Ülker Sokak: Bir Dışlanma Mekânı (Masks, Knights, Gacias, Ülker street: a place of marginalization). Pinar, whose motto is “Practice is at the basis of theory”, achieves excellence in her academic studies thanks to her passionate attitude and great idealism, which lead her to involve personally in the lives of the people at the core of her research, such as street boys, women victims of violence, homeless people and transvestites - with whom she created the Laboratory of Street Artists, able to offer those people an opportunity to integrate in society through the arts.
In 1998 a judicial nightmare set out for her. While she was about completing her research on civil war in Turkey, in which she investigated why many Kurds chose armed fight, interviewing several members of the PKK and thus becoming a target of the Turkish authorities, - she was accused of complicty with the PKK. She faced detention and tortured to lead her to confess the names of her contacts. Pinar resisted, spending two years and a half in prison and other 11 in the courtrooms. Despite the cancellation of the verdict and four acquittals, she was continuously accused of being a terrorist and compelled to live in exile  since 2009. In 2013 she was sentenced to life in jail in absentia. Such judicial ordeals befell also other "Righteous" and witnesses to truth against the state denial of Turkey, including Hrant Dink

Pinar Selek wrote, among other works, Barışamad (“We did not succeed in reconcilingi”),on the numerous struggles of modern Turkey to achieve permanent peace, and Sürüne Sürüne Erkeklik (“A dog's life: manhood”), on male life in the experiences of the military duty. She also wrote a book of tales and poems entitled Su Damlası (“Waterdrop”). In 2014 she published La maschera della verità  (The Mask of Truth) which was translated in Italy by Fandango publishing house to remember the 100th anniversary of the Armenian genocide - in which she  condemns the Turkish denial of Metz Yeghern, introducing this theme into a narration made of remarks, memories, witnesses and encounters.

In 2001 she was among the founders of women's cooperative Amargi and she organized meetings in Diyarbakır, Istanbul, Batman and Konya. She is currently an active member of Amargi and since 2006 she has worked as publisher and coordinator of the same name feminist magazine. She is also a co-founder of the first feminist bookshop of Turkey, Amargi, open to the public since 2008, and here she has coordinated until now the group of reading and writing “ What doors are opened by our experiences?”.

A political refugee to France, Pinar has taught at the university of Strasbourg. During these years over 4.500 people, including figures such as Orhan Pamuk and Yaşar Kemal, writers, film and theatre directors and producers, lawyers, professors, and many women, have shown their solidarity to her stating “We are witnesses to the attitude of Pinar Selek against violence".

Pinar Selek is honoured in the Garden of Milan - Monte Stella.