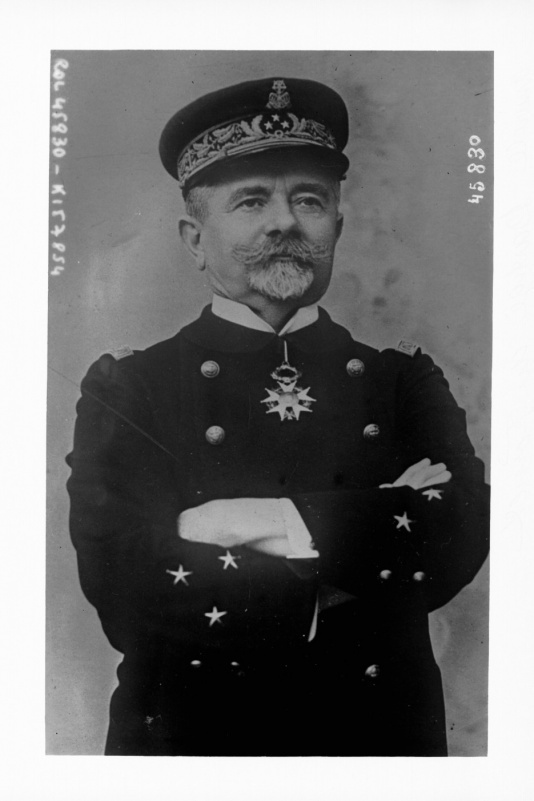 Louis René Charles Marie Dartige du Fournet was born in Putanges in Normandy in 1862 in a family belonging to the French upper middle class. In 1872 was admitted to the Naval Academy and left it with the rank of Major. He distinguished himself during the French-Siamese war in 1893 because he managed to free the port of Bangkok, thus ensuring the attribution to France of Laos and the neighboring territories on the left side of the Mekong River. In 1909 he was appointed Contre-amiral. During the Balkan wars (1912-1913) he was at the head of the French fleet in the Mediterranean Sea and then promoted vice Admiral.

In February 1915, during the WWI, he was at the head of the third French squadron based in Port-Said, Egypt, and in charge of blockading the Ottaman coast. In September 1915 the French Navy took over Rouad [Awad] and in December 1915 it took over Castelrosso, where it set up strategic bases during the conflict. Contemporarily, in July 1915 the Council of 6 villages mainly populated by Armenians in the district of Suede, Haji Habibli, Kebusiye [Kabusia], Vakıflı Köyü [Vak’ëf], Kheter Bey [Khodr Bey], Yoghunoluk, and Bitias reacted against the order of deportation. Over 5.000 Armenians found a refugee in the sloups of mount Musa Dagh [Mount Moses] and for 53 days they managed to repel the attacks of the Ottoman army. While the ammunition and the supplies were schrinking, the Armenian fighters tried to attract the attention of the allied fleet lighting bonfires and raising white flags: on one flag they painted a red cross and on the other they wrote “Christians in danger”. On September 5, the French cruiser Guichen, stationed in the north of Antioch Bay, recognized the signals, and Peter Dimlaikan, one of the members od the Armenian Resistance, embarked in order to talk with the Captain, who promised to help him.

On September 6, 1915 Dartige du Fournet, aboard the Jeanne d’Arc, was informed about what happened via telegram by Guichet. Thus, the next day he decided to perlustrate the area. He received on board Tigran Andreasyan, one of the heads of the Armenian Resistance, who asked him to evacuate at least the civilians, women, children and elder people. Dartige du Fournet realized the urgency and need of rescuing the besieged Armenians and sent immediately an emergency telegram to the General Command, but at the same time he was aware of the process time of bureaucracy versus the need to act as soon as possible. He risked his career and social position by giving the order to all the cruisers under his command to immediately start the evacuation of the Armenians from the Musa Dagh. On his logbook he writes: “The time was short and whatever it [the General Command] would have said, it necessary to evacuate them all”. Du Founret tried to contact also the British authorities in Cyprus and in Egypt asking them to offer shelter to the refugees. His request was initially denied, but he was able to persuade the allies to set up a refugee camp in Porto Said, in Egypt. He organized everything without the consent of his general commanders.

On September 10, 1915 on the 41st day of Resistance, two French warships opened the fire on the Ottoman positions around the Musa Dagh, in order to hide the rescue operations. On September 12, five French cruisers - Guichen, Admiral Charner, Desaix, Foudre and D’Estrées - approached the coast and lowered their lifeboats. Tiran Tekeyan, a French official of Armenian descent, coordinated the rescue operations, which lasted three days. Firstly, women, kids and elder people were evacuated, and only after the fighters. The total number of the people saved is 4.058, among which 1.563 children, including newborns. Some children were called Guichen in honor of the first cruiser who recognized the signals of help from musa Dagh. The refugees reached Egypt, where people offered them a shelter, supplies, medical care and education according to what ordered by Dartige, who was appointed shortly after Captain-in-chief at the head of the allied fleet in the East heading for the Bosphorus.

Three months after the evacuation, Darting received a reply from the Central Command answering to his telegram requesting permission to proceed with the rescue operations. This answer contained one only sentence in French: «Où se trouve mont Moise?» [«Where is Mount Mosè?»], which proves that if Dartige had acted following the military protocol would not have rescued any Armenian refugees.

Following the so-called Noemvrianà, the conflicts between the Greek military and the French fleet in Novemeber 1916 in Athens, Dartige du Fournet was removed from his duties by the Navy Ministry Lucien Lacaze. He was rehabilitated in his role at the end of the war, but he retired to private life with his wife. In 1920 he published his war memoir as Admiral, dedicating a whole chapter to the rescue operations of the Armenians at Musa Dagh. He died at Périgueux in 1940.

Louis Dartige du Fournet is honoured in the Garden of Marseille.