fights against negationism and honors the Righteous of the Armenian genocide 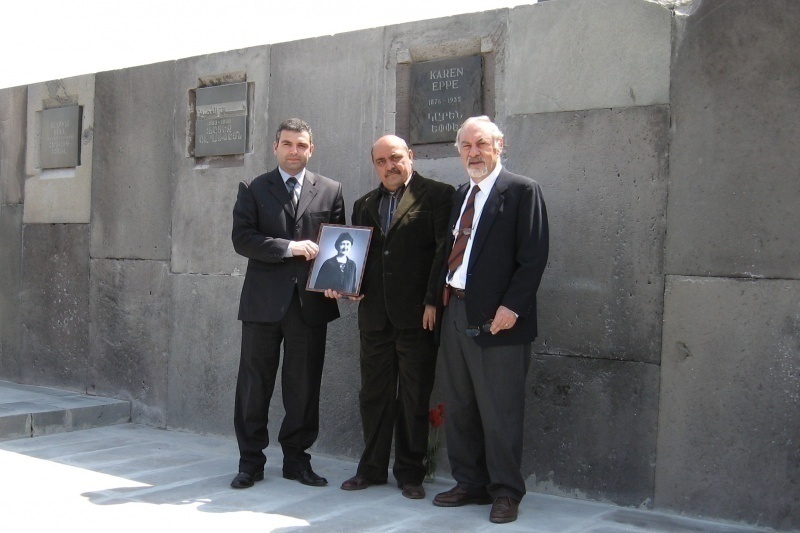 Peter Kuciukian, a surgeon, was born in Arco (Trento) on January 18th, 1940. He lives and works in Milan. He learned the Armenian language at the college of the Fathers Mechitarist of Venice, where he completed his studies, like his father before him. In 1964, he graduated in Medicine and Surgery at the University of Padua. He currently practices the profession in Milan.

His father, Ignadios, was sent to Italy by his grandfather Andon, from Istanbul, in 1915, at twelve years old, to save him from the Armenian genocide perpetrated by the Young Turk government. His great-grandparents came from Sebastia, today Sivas. After boarding school in Venice, Ignadios graduated in medicine in Turin, majored in Paris and finally got his first job as a doctor and radiologist phthisiologist in Arco di Trento, where he spent his entire life.

Ignadios had never answered children's questions about his childhood in Constantinople where he attended the College of St. Joseph and learned the French language, which he had never forgotten. Only in recent years, following the pressing demands of the family had begun to write a few pages of his childhood memories on Turkish soil.

For Peter Kuciukian, the rediscovery of the roots began after the death of his father in 1983. Reading the pages of the diary, short but intense, led him to become a wanderer in the land of their ancestors, to complete a story left in the diary of his father. One story in particular struck him: his grandfather in 1896, Andon , had saved the family from the pogroms unleashed by Sultan Abdul Hamid II, who had caused the massacre of 300,000 Armenians. The whole family had taken refuge in the basement for a week, while at the door of the house a Turkish friend stood guard who was shouting at angry mob that had killed more than six thousand Armenians: "Here there are no Armenians. There are none! "

Another fact helped push Kuciukian, now immersed in the study of genocide towards the pursuit of the good: the encounter with the historian Raymond Kevorkian: "If you dive too much into horror, you end up going crazy."

But the decisive factor that made Kuciukian a researcher of the just and saviors, rather than victims and executioners, happened in 1995. He had gone in Armenia together with Mischa Wegner, son of Armin Wegner, a "right" for the Armenians in 1915, risking their lives, and photographed the Armenian deportees, exposing to the world the crimes he had witnessed. During the ceremony, the burial of the ashes of Armin Wegner in the "Wall of Remembrance" of Dzidzernagapert in Yerevan, the capital of modern Armenia, the son Mischa was surrounded by a grateful and moved crowd. Among the crowd suddenly came off an old man with a full beard. He managed to get up to Mischa, grabbed his hands and said fiercely: "I bow to the ashes and the memory of Armin Wegner in front of his son. The Armenian people will never forget your father like he did not forget all those who he helped rebuild their past. I bow especially in front of your father. His memory will remain eternal, forever! "Germany, in 1915, was an ally of Turkey and conniving with the government of the Young Turks.

The "son of an enemy people" was in Armenia, in front of the monument to the genocide, to pay homage to the victims, a half million unburied Armenians, and they expressed their gratitude. He was the son of a Right. How can we not think of Willy Brandt kneeling in Warsaw to honor the victims of the Holocaust? Peter Kuciukian realized then that honoring the Righteous meant to open a page of reconciliation between peoples and saw clearly that the memory of the righteous and witnesses, in front of the many men who have reacted to the extreme evil, becoming the new frontier of his commitment.

From that moment, back in 1995, he pursued until now the goal to pay homage to one of the many Turks who saved persecuted Armenians, carrying his ashes in Armenia, inviting the two peoples living side by side, if not for reconciliation then at least acceptance, or mutual respect. Knowing that the journey is long and difficult, in recent years he has carried the burial ground of others "righteous" for the Armenians, collecting it in the countries where they had lived, and where they died. The "Wall of Remembrance" of Dzidzernagapert now has many niches that hold the ashes or a handful of earth of the righteous and the garden of Yerevan has been enriched by new trees.

Intense is also his commitment as a writer from his experience in Armenia during the aftermath of the earthquake of 1988 that saw him working as a doctor in the disaster areas. For the 'help given to their compatriots” he has received honorary citizenship of Stepanavan and Spitak. Other books were born from his experience of travel in the land of his ancestors and the countries of the Armenian Diaspora around the world.

With the volume Voices in the Wilderness: The Righteous and Witnesses for the Armenians (2000) he won the S. Vidal prize in Venice for dialogue between peoples and religions. In January 2003 he was awarded by the City of Milan’s "Golden Ambrogino" for the following reasons: He delivered the collective memory of the Righteous for the Armenians, immortalizing the humanity and courage of those who offered help to the persecuted and entrusting to history a valuable record of the tragic events of 1915-23, thus saving from oblivion the first genocide of the twentieth century. A memorial tree was dedicated to his honor and a tree was planted in the Garden of the Righteous near Monte Stella in Milan.

In 2006 he received from the President of the Province of Milan, the "Gold Medal of Gratitude" for the Wall of Remembrance of Dzidzernagapert in Armenia.

By decree of the Ministry of Foreign Affairs, on March 16th, 2007, Peter Kuciukian was appointed Honorary Consul of the Republic of Armenia in Italy, as the Milan consular office holder.

Pietro Kuciukian is honoured in the Garden of Milan - Monte Stella.