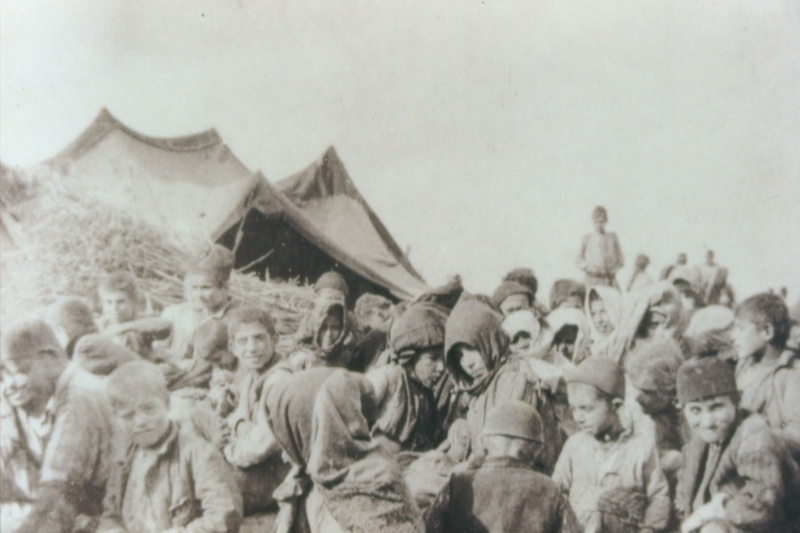 A Circassian officer and subject of the Ottoman empire, Hassan Amdja worked in the Ministry of Defence for the Navy. He was loyal to general Ahmed Djemal Pascià, a member of the triumvirate of the Government of the Young Turks in the years of the Armenian genocide. When Djemal disassociated himself from the line of the Union and Progress movement and clashed with the other two members of the triumvirate – the minister for War Enver Pascià and the minister of the Interior Talaat Pascià – the deportation of the Armenians had almost been completed. In August 1916 Djemal charged Hassan Amdja with taking the Armenians who had escaped death in the region around Damascus, to Jerusalem, to settle them in the coastal area of Syria and Palestine. Djemal intended to rule this area as a sultan and as an ally of the western powers against his former friends of the Government of the Young Turks. This plan failed because of divisions among the allies, due to their expansionist aims and to the collapse of the Czarist empire, while a power struggle was under way within the Turkish government. Djemal failed to implement his plan, faced with resistance from the civil authorities loyal to Talaat. Meanwhile, Hassan Amdja – who had already deployed to the area of the operations to organize safe passage for the Armenians – was pushed aside and forced to desist. He was nevertheless deeply shocked by the utterly wretched condition in which he had found the Armenians who had escaped the massacre.
In 1919, after the armistice had been signed and while the trials of those responsible for the genocide were being prepared, Hassan Amdja decided to publish a series of articles, in the Alemdar newspaper in Istanbul, on his experience of the Armenian deportations. The first article came out on 8 July, the second on 11 July and the third on 15 July. The fourth followed immediately. But Turkish society did not take kindly to the memories published in the officer’s reports or to the accusations that they implied. The newspaper received numerous letters of protest from the authorities and from members of the public. Fingers were pointed at the author and he was threatened in the street.
On 22 July Hassan interrupted the publication and wrote a letter to the editor denouncing the climate of intimidation and slander surrounding his action. He announced that he would not be prevented from exposing the truth and would do so in a book. The French language newspaper in Istanbul La Renaissance translated and published all four articles and broad extracts from his letter.