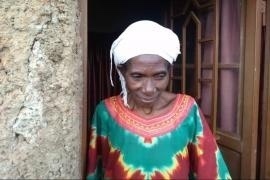 Josephine Nyankesha is an old woman who was awarded a medal by Rwanda's first Lady, Jeannette Kagame in recognition of her extra-ordinary role in taking care and saving lives of several Tutsis who were the target during the 1994 genocide. She is one out of more than 3000 individuals who were awarded this trophy known as Malaika Murinzi'.

Her husband was killed by interahamwe militias after refraining from collaborating with them in the heinous killings. Nyankesha and her husband were both Hutu who openly opposed militia's extremist ideologies. Unfortunately, Josephine is HIV positive as a result of being repeatedly raped by Interahamwe militias (Hutu extremists) and the Rwandan Government provides her with medications.

Nyankesha Josephine, (65) lives in Kigali -Rwanda, Gikondo sector. The Award given to her, reflects her courage during 1994 genocide committed against the Tutsi where she managed to save a two months old baby boy from a huge pile of dead bodies.

According to her, she saw the baby sucking his dead mother's breast, full of blood in a broad day light. She picked him up and run away as the militia chased her but she was able to hide. She struggled to save the baby's life searching for material and financial support from Samaritans.
"I picked up a baby and I had nothing. Can you please give me some milk? he cannot take porridge. I will pay you when I am able to get money. He immediately gave it to me, he is well gave me the baby bottle and instructed me on how to prepare the milk".

Nyankesha says she went to ''Kinamba cya kabiri'' in Kigali after she was informed that the militia had ceased killings. "The information I had was that the Interahamwe militia had stopped killing people. I wanted to see if my relatives had survived. When I looked around I saw that child raising legs and arms and I thought he must be alive. I decided to verify and save him, though the woman I was with went away and warned me not to go there for my safety''.

Musafiri Oswald, the saved boy
He is now (in 2020) 25 years old being in year one at one of Universities in Kigali under the sponsorship of the Governments special Fund for survivors of the 1994 Genocide against Tutsis {FARG}. He says he grew up believing he was just like other children, but indeed his background was quite different.