a survivor and witness from Rwanda 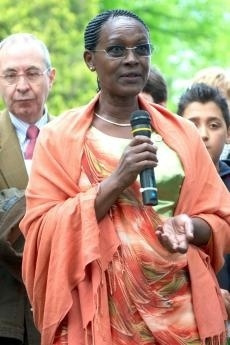 Yolande Mukagasana was born in Butare in a Tutsi family. At the age of 5 she was wounded during the Hutu revolution. She graduated in 1972, but the title of nurse anesthetist is officially recognized only in 1988, and she discovers that even in this field there are Hutu and Tutsi share. In 1992 she opened a small private practice in Kigali. This exposed her to envy and criticism, which will explode during the 1994 genocide. Yolande is a survivor of the genocide. In the massacres of 1994 she lost her husband and children. She managed to escape in a miraculous way through the help of a Hutu woman, Jacqueline Mukansonera. The chilling and moving account of that incredible story is faithfully rendered in the book Death Does not Want Me. Christian 15 years old, Sandrine, 14, Nadine, 13: machetes had no mercy on Yolande's children just as they had no pity for her husband Joseph. The same for their grandparents, their uncles. A house destroyed and razed to the ground. Every memory of a happy life destroyed. This was for Yolande Mukagasana, mother, wife, daughter and sister, the genocide in Rwanda, 1994. A life annihilated, but not destroyed. "Death does not want me," she often says, quoting the title of her book, now with a serene smile on her face when she speaks of those days. It has benn heard a little about that genocide, which left to the ground more than a million dead in three months, from April to July 1994: "The
media - says Yolande - were not talking about it, and even when they did they gave misinformation or partial, to protect those who commanded the genocide”.
Rwanda, a small country in Central Africa, nestled between Congo, Burundi,
Uganda has known the ethnic division only through European colonialism.

The three ethnic groups, Hutu, Tutsi and Twa, in the Rwandan legend, were nothing else but three brothers who used to live peacefully together. The colonialism has deliberately created divisions, defending the Hutu and revealing, through an out-and-out manifesto of the race, the malignancy of the Tutsi ethnicity: "At school we were two Tutsi girls - Yolande says - and they used us to show the physical differences with the rest of our comrades. It was natural for them to hate us. The genocide began first of all with our education”. And so in 1994, during 100 days, a murderous rage is sweeping the country. One Million people, or as Yolande says: "A life for a million times." Without distinction, the Tutsis were killed by friends and acquaintances turned in executioners without mercy. Yolande was saved for an absurd twist of fate, hidden for three months in the house of a Hutu woman, wearing clothes taken from a cadaver. Between her hands, her happy life had slipped away like sand: "I could understand the value of life only knowing death. Ever since a strong push inside me told me to be witness of what happened, a messenger of life, especially among young people. Yolande is now the mother of 21 orphans, adopted after the genocide, she is the author of some texts that narrate her story but also that of those who escaped and those who killed "Interviewing the butchers for my book, I wonder how they are first of all victims of their own hate."

Yolande is not afraid to go back where the murderers of her family walk free on the street:"Why should I be afraid? Even in Europe the authors of the genocide go around quiet. And if I risk to die to give a sign of peace, welcome. I realize that there can be no forgiveness without justice, no justice without humanity”.
Yolande has dedicated her life to hand down the memory of the genocide, through her word, through her writings, through her charismatic presence. Especially for the younger generations: "It is stil l necessary to work with children to build a
future without hate, which is not yet eradicated. Hate must be overcome to build a future of peace: "I don’t feel hate any more for those who killed my family, I want to bring life to those who listen to me and I ask to do the same every day because only in this way we really give justice to those who died blameless”. True mission, that of Yolanda, who continues every day despite daily difficulties and the
immense weight of memory: "In Rwanda there isn’t a day without sunshine, maybe that is why we learn to show smile even when we want to scream in pain”. After the genocide Yolande took refuge in Belgium where, in 1999, achieved the citizenship. Here she began her work as a writer and activist trying to bring the international attention on the tragedy that affected and continues to plague Rwanda. Yolande brought her testimony around the world guest of governments, institutions, associations, universities, schools. She has been also invited by the Italian Parliament and participated at the 6th World Summit of Nobel Prizes for peace in Rome, from 24/11/2005 to 26/11/2005.